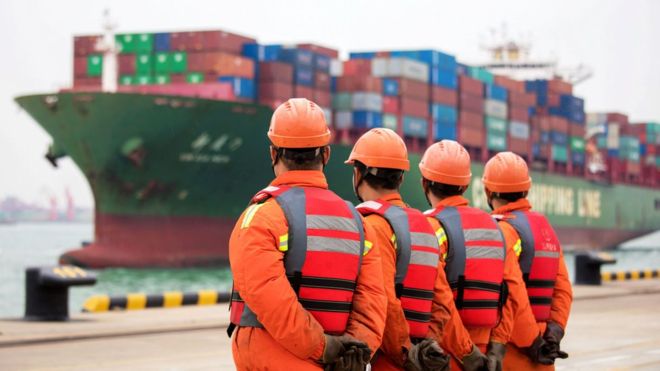 President Trump has pledged to retaliate after China announced plans to impose a 10% tariff on $75bn worth of goods imported from the US.

The new taxes were themselves a response to Mr Trump's plans for a 10% levy on $300bn of Chinese imports.

Wall Street share markets dived after the president tweeted that he would respond to the new tax later on Friday.

He insisted that US firms find an alternative to China and return production to America.

"Our great American companies are hereby ordered to immediately start looking for an alternative to China, including bringing your companies home and making your products in the USA," he tweeted. "I will be responding to China's tariffs this afternoon."

China's new tariffs will range between 5% and 10% and will apply to more than 5,000 goods coming from the US.

Agricultural goods, crude oil and small aircraft are among the products being targeted.

Beijing will also revive a 25% tariff on US car imports that it lifted earlier in 2019 in a goodwill gesture as the two countries tried to negotiate a trade agreement.

Carmakers responded, warning that the tax would put US jobs at risk. "When these tariffs were initially imposed by China in 2017, American exports of finished vehicles dropped by 50%," said John Bozzella, who represents car manufacturers. "We can't let that happen to American workers again."

On 1 August, President Trump unveiled a 10% tariff on $300bn of Chinese goods, blaming China for not following through on promises to buy more American agricultural products.

That tariff was expected to be introduced on 1 September, but less than two weeks later Mr Trump delayed that date to 15 December, partly due to concerns it might hit Christmas shoppers.

China said it planned to impose its new tariffs in two stages on 1 September and 15 December.

The US has sought to play down news of the new taxes. President Trump's trade adviser, Peter Navarro, told CNN that the Chinese tariffs were "well signalled," adding: "This isn't breaking news."

He said that talks between the two countries were on schedule and argued that the tariffs were not hurting Americans. "Consumers aren't feeling the pain [of the trade war] and we are focused on making sure they [China] feel the pain not us."

He added that the economic slowdown was the fault of the US Federal Reserve, which has drawn criticism from Mr Trump for not making bigger cuts in interest rates.

News of the new tariffs broke shortly before Fed chair Mr Powell delivered a much-anticipated speech at a gathering of central bankers in Jackson Hole, Wyoming.

The speech was set against a complex economic backdrop in the US where bond markets have sent warning signals of an impending recession. However, equities are trading at near record highs and employment is at its highest level in almost 50 years.

Mr Powell warned that trade tensions were exacerbating a slowdown in the global economy, adding that the Fed doesn't have a "rulebook" for dealing with the fallout.

But Mr Trump took to Twitter on Friday to claim that the economy was "strong and good". In contrast, he said, "the rest of the world is not doing so well".

He questioned whether Mr Powell was a bigger enemy to the US than China's president Xi Jinping.

Stock markets in the US opened lower following news of China's tariffs, but then recovered. However, they fell again in response to Mr Trump's tweets.