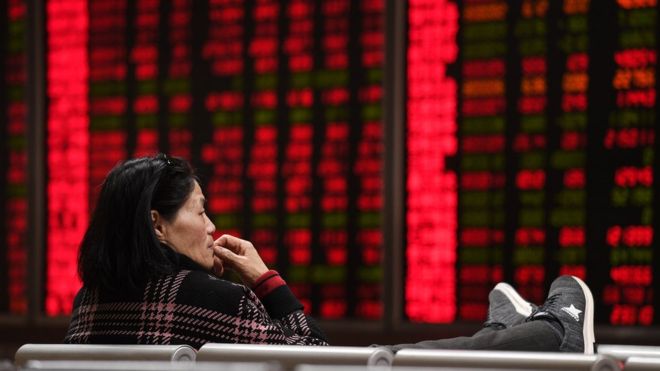 On Friday, US President Donald Trump announced tariff hikes on effectively all Chinese imports to the US.

It came after Beijing said it would impose fresh duties and raise tariffs on US imports into China.

Japan's benchmark Nikkei 225 index dropped 2.3%. The Chinese yuan weakened to a fresh 11-year low against the US dollar. The onshore yuan was around 7.15 per dollar in morning Asian trade.

Sharp falls in the yuan earlier this month prompted the US to officially name China a "currency manipulator", adding to tensions between the two countries.

"The trade war between the US and China has escalated dramatically," Louis Kuijs, head of Asia Economics at Oxford Economics said.

"This tit-for-tat escalation shows how unlikely a trade deal and de-escalation have become."

On Friday, the US said it would begin the process of raising tariffs on around $250bn (£203.8bn) of Chinese imports from 25% to 30%. Those hikes will be introduced from 1 October.

The US also said fresh tariffs on an additional $300bn of Chinese goods, announced earlier this month, will now be at a rate of 15% instead of 10%. The first batch of those tariffs will be introduced in September.

In a tweet, Mr Trump said he planned to order US firms working in China to move their operations back to the US. It is unclear how he could force firms to comply.

The moves came after China delivered its latest trade war strike, announcing plans to hit $75bn worth of US goods with new tariffs and hikes to existing duties.

The world's two largest economies have been locked in a bruising trade battle for the past year that has seen tariffs imposed on billions of dollars worth of one another's goods.

Mr Trump has long accused China of unfair trading practices and intellectual property theft. In China, there is a perception that the US is trying to curb its rise.