New Zealand bans dolphin swimming: People are loving them 'too much' 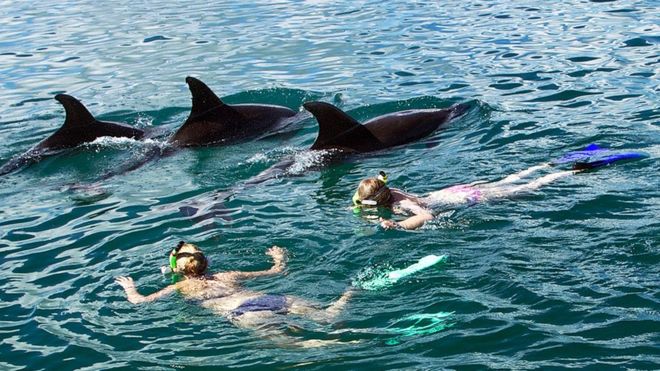 Tourists in New Zealand have been banned from swimming with bottlenose dolphins because of the impact it has on the animals.

New research shows people have been "loving the dolphins too much".

Interactions with the dolphins has had a "significant impact" on the population's resting and feeding, says the department of conservation.

People had been able to swim with the bottlenose dolphins in the Bay of Islands, on New Zealand's north island.

But with the number of dolphins frequently visiting the bay dropping by 66% since 1999 - and now only 19 returning frequently - tourists have been banned from swimming with them there.

Interactions with humans have affected the dolphins' rest, feeding and calf mortality
The research also shows that dolphins in the bay have a 75% calf mortality rate - which is the highest number of deaths in the world, in captivity or the wild.

The new rules came into effect in July of this year.

They ban swimming with the dolphins entirely and tour operators who have a license to take people out on the water can only do that in either the morning or the afternoon.

This will allow the dolphins to have a block of time with no human interaction.

"The Bay of Islands bottlenose dolphin population can only be protected if everyone plays their part," say the New Zealand department of conservation
There were already some restrictions to protect them, but the new research shows they didn't go far enough.

Is animal tourism over?

Getting close to exotic animals abroad is tempting for tourists, but countries across the world are starting to put conservation first - ahead of commercial gain.

Earlier this year it was confirmed that elephant rides at Cambodia's Angkor Wat temple would come to an end in 2020.

The 14 elephants who are forced to carry tourists will be transferred to a conservation and breeding centre early next year.

In Hawaii, officials are planning to introduce new laws that ban swimming with spinner dolphins.

They admitted, however, that restrictions wouldn't stop dolphins approaching swimmers or boats themselves, saying that they are "very social animals" - sometimes a little too social perhaps.

In 2018 swimmers were banned from taking a dip on a beach in Brittany because a dolphin was harrassing humans.

The dolphin was said to have often been sexually aroused and tried to stop people from getting out of the water and back onto the beach at Landévennec.