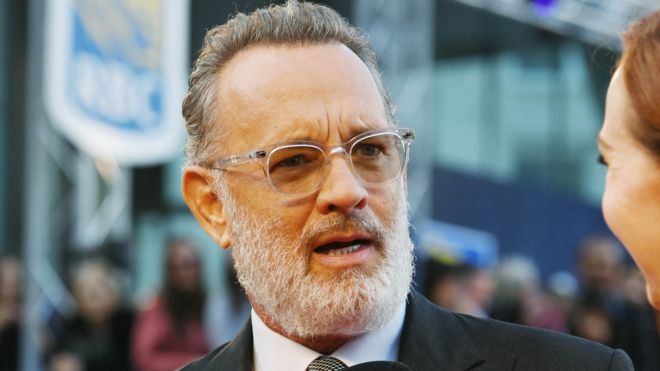 Tom Hanks has said the increasing level of cynicism in society is partly what led him to take a role as a loveable children's entertainer.

The actor plays Fred Rogers in his new movie - a legendary US kids TV host whose brand was wholesome and warm.

"Cynicism has become the default position for so much of daily structure and daily intercourse," Hanks told reporters.

"Why? Because it's easy, and there's good money to be made."

"Cynicism is a great product to sell, and it's the perfect beginning of any examination of anything. And part of that is conspiracy theories and what have you.

"But I think when Fred Rogers first saw children's programming, he saw something that was cynical, and why would you put something that is cynical in front of a two or three-year-old kid? That you are not cool because you don't have this toy? That it's funny to see someone being bopped on the head?

"That's a cynical treatment of the audience, and we have become so inured to that, that when we are met with as simple a message as 'Hey you know what, it's a beautiful day in the neighbourhood!' we get slapped a little bit. We are allowed, I think, to feel good. There's a place for cynicism, but why begin with it right off the bat?"

A Beautiful Day In The Neighbourhood serves as the title of the Rogers film, which is directed by Marielle Heller - well known for the Oscar-nominated Can You Ever Forgive Me?

Heller has explained that, because Mr Rogers (as he was known) had such little conflict in his life, he was not an obvious protagonist for a movie, and his career alone wouldn't have served as a strong enough storyline.

Instead, A Beautiful Day In The Neighbourhood follows the relationship between Mr Rogers and a journalist for Esquire magazine, who wrote a profile of the entertainer in 1998.

The journalist who wrote the original piece, Tom Junod, possessed by trade just the kind of cynical personality Hanks refers to. But when he met Mr Rogers, he found a more complex character than he was expecting.

Over a series of sittings, he and Mr Rogers developed a friendship. The entertainer won Junod over with his seemingly unrelenting kindness and empathy, helping him examine his own issues and find a deeper appreciation for life.

lt is, frankly, an outstanding film - one of the best seen so far at the Toronto Film Festival and undoubtedly an awards season contender.

"Hanks isn't just good - he's transporting," added Variety's Owen Gleiberman. "He takes on Mr Rogers' legendary mannerisms and owns them, using them as a conduit to Rogers' disarming inner spirit. He makes you believe in this too-nice-for-words man... [the film] is a soft-hearted fable that works on you in an enchanting way."

The Hollywood Reporter was more sceptical: "It is a sympathetic and yet entirely predictable in its dramatic trajectory of making a believer of an angry, cynical journalist. Still, the lure of the Hanks/Rogers match-up looks to stir some reasonable commercial returns."

The script for A Beautiful Day in the Neighbourhood had been floating around Hollywood for some time before production began.

Hanks even passed on the role several times - but then ended up saying yes once director Marielle Heller became attached to the project.

The pair had been looking to work on a film together for some time and Hanks said he felt she was the right person to deliver it to the screen.

Matthew Rhys, who plays the journalist, said the film taps into a vulnerability which men in particular often keep hidden under the surface.

"Marielle talked about giving men in general a greater emotional vocabulary, or working towards articulating their emotions, and not just generally men, I think society in general would benefit from it," he said.

"And I think it was instantly relatable that someone was so desperately wanting to be seen, but hiding behind this castle that he built for himself, and I think it's a message of hope."

Mr Rogers, who died in 2003, isn't well known in many international territories, however, in the same way he is in the US.

Therefore, while a Tom Hanks movie can generally be expected to draw the public to the cinema, the distributors may have a struggle on their hands to market it in some international territories.

But by the time it reaches UK cinemas, the awards season buzz it is generating may well be enough to carry it to significant box office success.