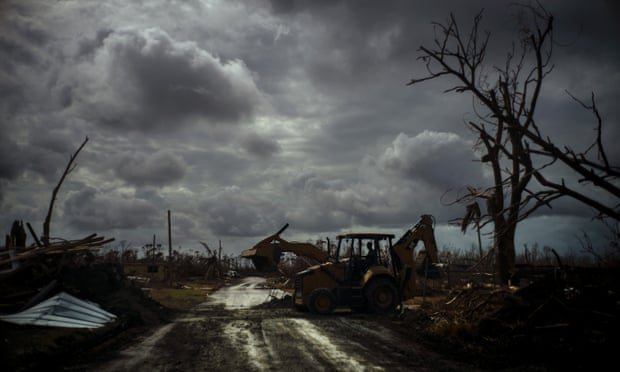 A tropical storm carrying heavy rain and strong winds is nearing the already devastated Bahamas, threatening to complicate Hurricane Dorian recovery efforts as the UN secretary general arrived in the islands in a show of support, the Guardian reports.

The new weather system, known as Tropical Storm Humberto,is expected to drop up to 15cm (6 inches) of rain through the weekend in areas of the islands inundated by Dorian, according to the Miami-based National Hurricane Centre.

Hurricane Dorianhit the Bahamas on 1 September as a Category-5 storm, one of the strongest Atlantic hurricanes on record to hit land, packing top sustained winds of 298 km/h (185 mph).

“The financial cost of the damage caused by Dorian is not clear, but it will be in the billions of dollars. The Bahamas cannot be expected to foot this bill alone,” UN secretary general Antonio Guterres is expected to say on his arrival in Nassau, according to a transcript of his prepared remarks.

Guterres was expected to visit over the weekend with people affected by the hurricane and the humanitarian teams assisting them. He planned to meet with the prime minister, Hubert Minnis, in Nassau.

Minnis said earlier this week that the official death toll stood at 50 but was expected to rise.

Tropical Storm Humberto is not expected to bring anywhere near the devastation of Dorian. But the potentially heavy rain and winds, which could reach 64 km/h (40 mph), could hamper relief efforts in the northern Bahamas, where the powerful and slow-moving Dorian flattened thousands of structures and left 76,000 people needing shelter, food, water and medical assistance.

The storm could delay the movement of food and water already on the ground, said a spokesman for the National Emergency Management Agency, Carl Smith, during a news conference.

“I hope it does not disrupt it. We have taken precautionary measures to address the potential impact that we may encounter,” Smith said.

World Central Kitchen, a charity that has served some 200,000 prepared meals in the Bahamas since Dorian hit, said it was sending ingredients to Great Abaco Island ahead of the storm in case helicopters were unable to deliver ready-cooked food in the affected areas.

Officials have erected large tents in Nassau to house those made homeless by Dorian. They plan to erect tent cities on the Abaco islands to shelter up to 4,000 people.