Ancient hand-holding ‘Lovers of Modena’ skeletons were both men 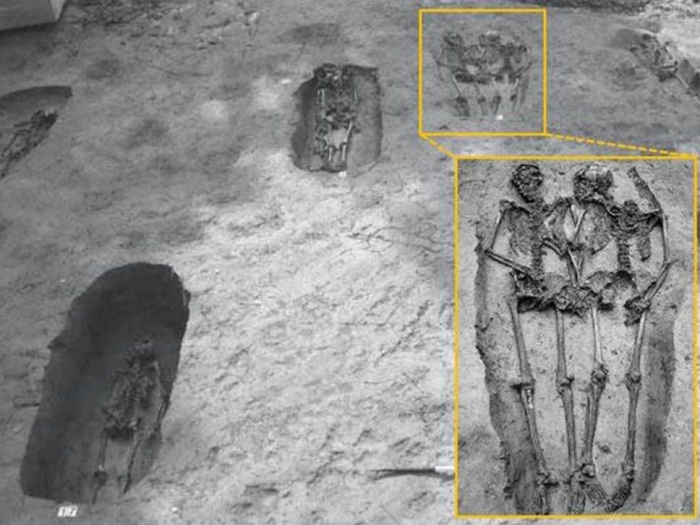 Two ancient skeletons nicknamed “the Lovers of Modena” as they were buried holding hands were both men, researchers have discovered.

The pair, believed to have died between the fourth and sixth centuries, had until now been thought to be a man and a woman.

But when the bones were found near Modena in northern Italy in 2009, scientists could not be sure of their sexes because they were badly preserved.

Now a new technique, using tooth enamel proteins, has revealed they were both male. However, the relationship between the men remains a mystery.

The way in which the pair were buried represents “a voluntary expression of commitment between two individuals” and was not a common burial practice, according to the research, which was published in the Scientific Reports journal.

Researchers at the University of Bologna say their burial site may have been a war cemetery, and that the men could have been brothers, cousins or soldiers who died together in battle.

Study author Federico Lugli told Italy’s Rai television network: “Many tombs have been found in the past with couples holding hands, but in those cases it was a man and a woman.

"What may have been the bond between these two individuals is a mystery.

“The burial of two men hand-in-hand was certainly not a common practice in the late-ancient era.

“We believe that this choice symbolises a particular relationship between the two individuals, but we do not know the nature of it.”

Christian faith and social attitudes meant that openly gay relationships would have been severely frowned on, and in most of the sixth century would probably have been considered a crime.