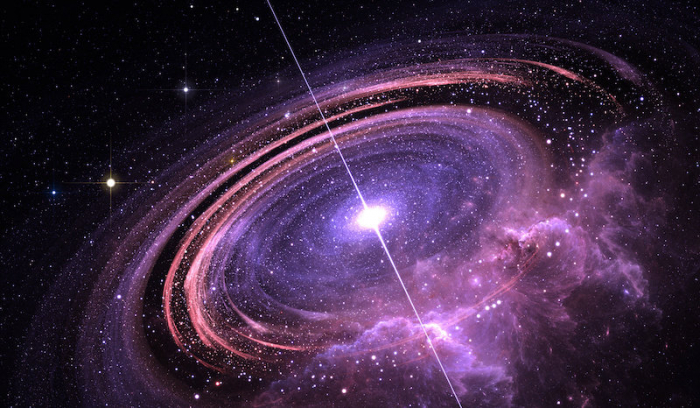 Astronomers have discovered the most massive example yet of the dead stars known as neutron stars, one almost too massive to exist, a new study finds.

Neutron stars, like black holes, are corpses of stars that died in catastrophic explosions known as supernovas. When a star goes supernova, the core of its remains collapses under the strength of its own gravitational pull. If this remnant is massive enough, it may form a black hole, which has gravity so powerful that not even light can escape. A less massive core will form a neutron star, so named because its gravity is strong enough to crush protons together with electrons to form neutrons.

"Neutron stars are as mysterious as they are fascinating," study lead author Thankful Cromartie at the University of Virginia and the National Radio Astronomy Observatory, both in Charlottesville, Virginia, said in a statement. "These city-sized objects are essentially ginormous atomic nuclei."

Neutron stars are usually small, with diameters of about 12 miles (19 kilometers) or so, but they are extraordinarily dense. A neutron star's mass is often about the same as that of the sun; a sugar-cube's worth of neutron-star material has a mass of about 100 million tons, or about the same as the entire human population, according to the statement. This makes neutron stars the universe's densest objects besides black holes.

Although scientists have studied neutron stars for decades, many of their mysteries remain unsolved. For example, do the incredible pressures found within neutron stars break neutrons down into soups of still tinier subatomic particles known as quarks? What is the tipping point when gravity wins out over matter and forms a black hole?

"These stars are very exotic," study co-author Maura McLaughlin at West Virginia University in Morgantown said in a separate statement. "We don't know what they're made of and one really important question is, 'How massive can you make one of these stars?' It has implications for very exotic material that we simply can't create in a laboratory on Earth."

The newly measured neutron star, called J0740 6620, lies about 4,600 light-years from Earth. It packs 2.14 times the mass of the sun into a sphere only about 15 miles (25 km) in diameter. That approaches the theoretical limits of how massive and compact a single object can become without crushing itself down under the force of its own gravitational pull into a black hole.

"Neutron stars have this tipping point where their interior densities get so extreme that the force of gravity overwhelms even the ability of neutrons to resist further collapse," study co-author Scott Ransom, an astronomer at the National Radio Astronomy Observatory, said in a statement. "Each 'most massive' neutron star we find brings us closer to identifying that tipping point and helping us to understand the physics of matter at these mind-boggling densities."

J0740 6620 is a kind of rotating neutron star known as a pulsar. Pulsars emit twin beams of radio waves from their magnetic poles, flashing like lighthouse beacons — hence their name, which is short for "pulsating star." Specifically, J0740 6620 is a type of pulsar known as a millisecond pulsar, which rapidly spin hundreds of revolutions per second.

This discovery was a serendipitous result made during routine observations taken as part of a search for invisible ripples in space-time known as gravitational waves using the Green Bank Telescope in West Virginia, McLaughlin said.

"At Green Bank, we're trying to detect gravitational waves from pulsars," he said. "In order to do that, we need to observe lots of millisecond pulsars."

The scientists detailed their findings Sept. 16 in the journal Nature Astronomy.