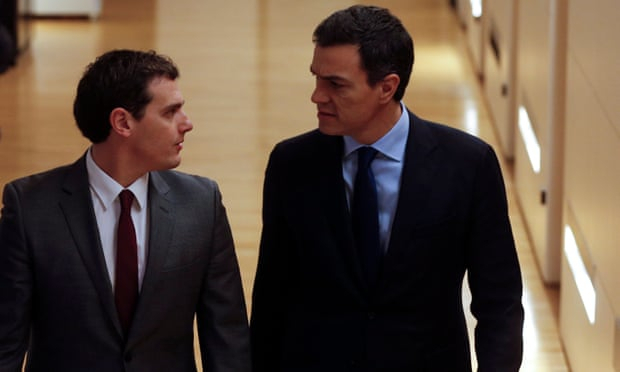 Spain is bracing for its fourth election in as many years as the deadline looms for the formation of a government following April’s inconclusive vote.

Although the Spanish socialist party (PSOE), led by the acting prime minister, Pedro Sánchez, won the most votes five months ago, it fell well short of a majority in the country’s 350-seat congress.

Sánchez’s efforts to form a government have been hobbled by the refusal of the centre-right Citizens party to countenance a pact with the PSOE, and by the socialists’ own firm veto on entering into a coalition with the anti-austerity party Unidas Podemos.

Spain’s King Felipe has been carrying out traditional consultations with party leaders in a bid to break the impasse, but hopes of a deal remain low. If an agreement is not reached by Monday 23 September a general election will be held on 10 November.

On Tuesday morning, Sánchez turned down a request for an urgent meeting from Albert Rivera, the leader of the Citizens party.

Rivera had softened his party’s line, offering to help Sánchez back into office by abstaining during any forthcoming investiture debate, on the proviso PSOE promised not to increase taxes, ruled out pardoning the 12 Catalan leaders on trial for their role over the 2017 independence bid, and rejected the support of secessionists in the Navarra region.

Sánchez said his party was already fulfilling the conditions.

The acting PM was due to call Rivera, Podemos’s leader, Pablo Iglesias, and Pablo Casado, the leader of the conservative People’s party (PP), on Tuesday to determine their “final decision” as Monday’s deadline moved closer.

“Pedro Sánchez is committed to establishing a legislature without the need for elections and to creating a stable government, which is what Spainneeds,” said a PSOE source.

Recent polls suggested the socialists would again finish first in a repeat poll, but would still fail to secure a majority. They predict the PP will finish second, picking up more seats than in April, while Citizens will fare very badly, losing between 19 and 23 seats.