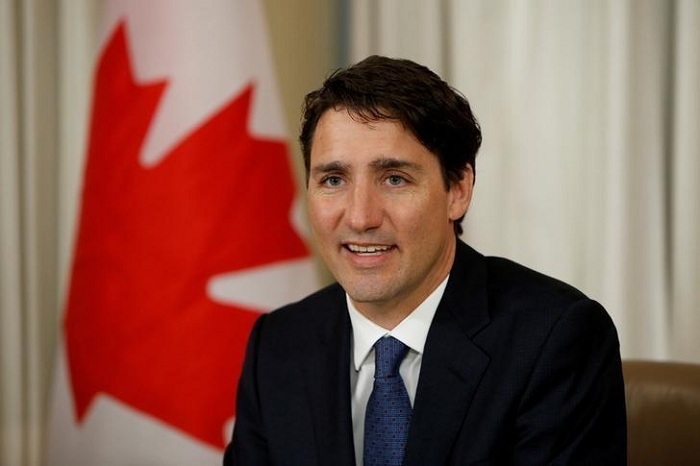 Justin Trudeau has apologised for wearing brownface makeup to a party when he was a teacher in 2001, saying “it was a racist thing to do” – and marking a potential turning point in next month’s tightly contested general election.

A photograph of Trudeau with brown makeup on his face, neck and hands and dressed in a turban and robes was published by Time magazine on Wednesday. It appeared in a school yearbook, while Trudeau, then 29, was working as a teacher at West Point Grey Academy.

“I apologise profoundly,” said the Canadian prime minister on Wednesday night after the photograph was published. “I regret it deeply. I’m deeply sorry I did that, I should have known better.”

“It was something I should not have done. I didn’t think it was racist at the time, but now I see, it was a racist thing to do.”

Trudeau did not answer a question about whether he had considered resigning.

“In 2001, when I was a teacher in Vancouver, I attended an end-of-year gala, the theme was Arabian nights. I dressed up in an Aladdin costume and put makeup on. I shouldn’t have done it. I should have known better, but I didn’t and I’m really sorry,” Trudeau said.

Political rivals seized on the opportunity to attack the prime minister, issuing scathing condemnations following revelations of the damning image.

Andrew Scheer, the Conservative leader and Trudeau’s main opponent, said he was “extremely shocked and disappointed” at the actions of the prime minister, calling his rival “unfit” to lead Canada. “It was racist in 2001, it’s racist now,” he said.

Scheer has consistently used the prime minister’s ethical lapses to paint the government as unable to govern effectively. But the Conservative leader has also faced calls to eject his own party members for racist or homophobic statements in recent weeks. He told reporters he would stand by candidates who showed genuine remorse for previous actions.

After issuing an initial condemnation of the image, Jagmeet Singh, leader of the New Democratic party, released a second video, in which he emotionally described the racism he and many others faced growing up in Canada.

The Green party leader, Elizabeth May, said she was “deeply shocked by the racism shown in this photograph of Justin Trudeau”.

“He must apologize for the harm done and commit to learning and appreciating the requirement to model social justice leadership at all levels of government,” she said in a statement. “In this matter he has failed.”

The National Council of Canadian Muslims said his appearance in brownface was “disgraceful”, but later thanked the prime minister for apologizing.

In his apology, the prime minister also confirmed that this was not the first time he had done something like this, saying that when he was in high school he dressed up at a talent show and sang Day O, a traditional Jamaican folk song, “with makeup on”.

“Obviously I regret that I did it,” he said. “I’m pissed off at myself, obviously.”

He told reporters he had made numerous calls to friends and colleagues – and expected to make more on Thursday.

The incident comes as Trudeau is locked in a fight to maintain his parliamentary majority. Canadians vote on 21 October, in what many expect to be a tight race.

Polling suggests Trudeau and Scheer are deadlocked in the popular vote, but that the Liberals hold an edge when it comes to winning seats in parliament.

The election will be fought against the backdrop of a protracted political scandal for the incumbent prime minister, with accusations – including from the country’s ethics commissioner – that Trudeau acted improperly when he requested his attorney general to halt criminal prosecution of the Quebec-based engineering giant SNC Lavalin.

After his election in 2015, Trudeau was hailed for naming a young and ethnically-diverse cabinet, with a ministerial team that for the first time in the country’s history was equally balanced between men and women.

His cabinet included Maryam Monsef, who fled Afghanistan as a refugee 20 years ago and will oversee the democratic reform portfolio, as well as two Indigenous members of parliament and three Sikh politicians.

“It’s important to be here before you today to present to Canada a cabinet that looks like Canada,” Trudeau said after he was sworn in.

However, the Canadian leader has also been criticised for his treatment of Indigenous peoples, particularly in relation to the Trans Mountain pipeline project that the Liberal government has supported despite environmental and Indigenous groups fiercely opposing the project.

It is unclear how the image will impact the prime minister, who has cultivated a tightly-controlled social media image. When asked by reporters if he would eject a member of his own party for a similar image, he said he wouldn’t entertain “hypotheticals” and that each incident would be viewed on a “case-by-case basis”.

When asked why he should stay on as leader, Trudeau responded: “I’m asking Canadians to forgive me for what I did.”