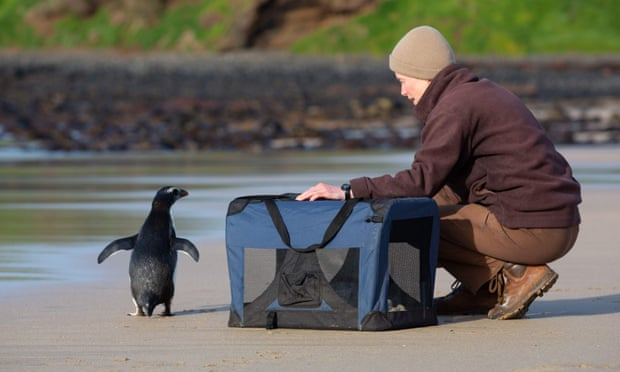 A New Zealand penguin that washed up on a beach in Victoria has been released back to the wild to complete a 2,500km swim home.

The emaciated Fiordland penguin was found struggling against rocks in the shallows at Kennett River, 170km west of Melbourne, on 10 July.

It was taken to Melbourne Zoo by the marine response unit and given a balance of fluids and nutrients until it was well enough to eat. Once it felt better, said Melbourne Zoo’s head of veterinary services, Dr Michael Lynch, it began to eat with gusto.

“Once it got going it really stacked on the weight, a huge appetite,” Lynch said. “It was eating 20-25% of its own bodyweight per day. That would be like an 80kg person eating 20kg of food a day. It’s quite amazing how much food it could pack down.”

Once the penguin had returned to a healthy weight – they are usually about 3.5kg – it was sent to Phillip Island Nature Parks to build up its swimming muscles in their larger pools, ready for the journey home to New Zealand.

It was released this month after eight weeks’ recuperation.

“We are hoping that it will get back to New Zealand and breed,” Lynch said. “We put a microchip into the bird so if it does turn up back in New Zealand one day and someone reads that microchip we will be very happy.”

Melbourne is at the outer edge of the normal range for the IUCN red-listed species, which has breeding grounds on New Zealand’s south island and surrounding smaller islands.

The global wild population of the penguins, which are listed as vulnerable, is estimated to be between 4,000 and 5,600.

Lynch said the penguins had previously been very rare in Australia but had been turning up more in recent years, for reasons as yet unknown.

“The species is known to forage over thousands of kilometres and we are within the edge of the range of this bird,” he said. “So it is not out of the question that we would see the birds here, but they are certainly a long way from home.”

Other penguin species have also embarked on unlikely trans-Tasman trips.

In 2014, a Snares penguin dubbed “Miss Simpson” was found on a Tasmanian beach some 2,000km from its home grounds of the Snares Islands, south of New Zealand, and spent nine months in recovery before being released.

Scientists in New Zealand recently discovered that a little penguin colony near Otago in the South Island was made up of Australian invaders, little blue penguins that had colonised the area and replaced a similar local species 500 years ago.