Amazon pledges to be carbon neutral by 2040 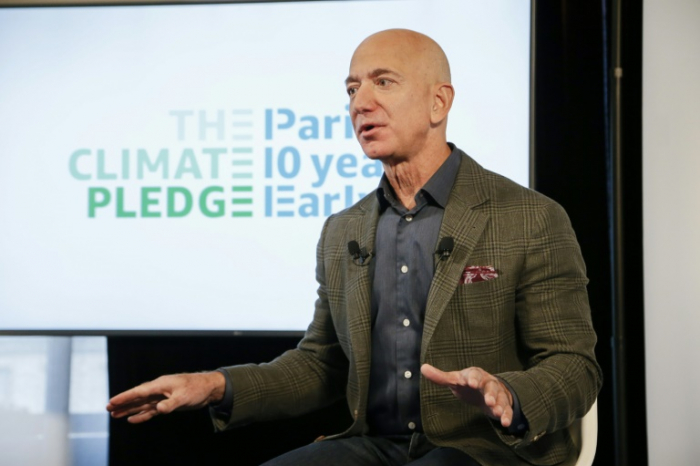 Amazon chief Jeff Bezos pledged Thursday to make the US technology and retail giant carbon neutral by 2040 and encourage other firms to do likewise, in a bid to help meet the goals of the Paris climate accord 10 years early, AzVision.az reports citing AFP.

"We want to use our scope and our scale to lead the way," Bezos told a news conference in the US capital, aiming to shake off the firm's reputation as a laggard on environmental issues.

Amazon announced its "Climate Pledge" initiative and said it would be its first signatory, as part of an effort to reduce emissions in line with a 2050 goal for carbon neutrality set by the Paris agreement.

"We're done being in the middle of the herd on this issue," Bezos said.

"If a company with as much physical infrastructure as Amazon -- which delivers more than 10 billion items a year -- can meet the Paris agreement 10 years early, then any company can."

Bezos said he had spoken with other CEOs of global companies, and noted "I'm finding a lot of interest in joining the pledge."

The first vans will hit the road in 2021, with the fleet to be fully operational in 2030. Amazon also pledged to invest $100 million on reforestation efforts in cooperation with the Nature Conservancy.

Amazon said its new "sustainability" initiative would deal with all of its business operations, with reduced carbon in packaging, delivery and its own energy use.

Bezos's announcement came the day before a global day of demonstrations to demand action on climate change, ahead of a UN summit on zero emissions on September 23.

Amazon faces mounting pressure to address its environmental impact, with more than 1,000 of its workers planning to walk off the job Friday as part of the Global Climate Strike.

Asked about the Amazon employees set to join the strike, Bezos called it "totally understandable."

Amazon staff welcomed the announcement but said they would maintain their protest.

"Climate Pledge is a huge win.. & we're thrilled at what workers have achieved in under a year. But we know it's not enough," said a Twitter message from Amazon Employees for Climate Justice.

"The Paris Agreement, by itself, won't get us to a livable world. Today, we celebrate. Tomorrow, we'll be in the streets.

Greenpeace USA senior campaigner Gary Cook said the Amazon news was positive but lacked details on how it would be implemented.

"Amazon is known for speed, but if Jeff Bezos wants Amazon to be a leader on climate, he needs to spell out exactly how it is going to rapidly move the company off of fossil fuels to keep our planet within the 1.5 degree temperature threshold in the Paris Agreement that Amazon has now committed to," Cook said.

Bezos was joined by Christiana Figueres, the former UN climate chief and founder of the climate activist group Global Optimism, who expressed hope the pledge would spur more action by companies.

"If Amazon can set ambitious goals like this and make significant changes at their scale, we think many more companies should be able to do the same and will accept the challenge," she said.

This will involve investments in wind and solar energy projects and initiatives to curb carbon emissions at its facilities including the second headquarters, HQ2, just outside the US capital.
Bezos said that Amazon's move to speedier shipping, including one-day delivery on many items, would be a net positive in environmental terms even though it was "counterintuitive."

"The reason is, that once you get to one day and same day, you can't really do it by air transportation anymore," he said.

This means keeping warehouses and products closer to the consumer and as a result "you're actually transporting the products in a very efficient way," he said.