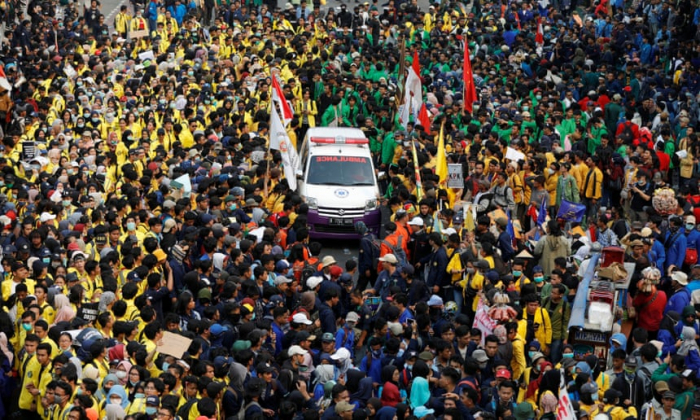 Thousands of students have taken to the streets in Indonesia to protest against a “disastrous” draft criminal code that would include outlawing extramarital sex and a controversial new law that could weaken the nation’s anti-corruption body, Guardian reports.

On Tuesday, the second consecutive day of protests, thousands of students gathered outside the parliament building in Jakarta, calling for the government to suspend its plans to ratify the draft code. Police fired teargas and water cannon to disperse the demonstrators.

If passed, the new laws would usher in sweeping changes that activists have described as a disaster for human rights and democratic freedoms.

Among a series of contentious articles are those that would outlaw adultery, unmarried couples living together, as well as make insulting the president a criminal offence that could carry a jail sentence.

Protesters also demanded the government repeal a law passed last week that is widely believed will curtail the investigative powers of Indonesia’s anti-corruption agency the Corruption Eradication Commission, known as the KPK.

“We reject the bill on KPK being forced into law,” a speaker told a cheering crowd in front of the parliament building. “Corrupters tried to manipulate us this way, it’s the poor that are going to suffer most.”

As they threw rocks at the parliament building, angry protesters accused the government of trying to return the country to the “new order” era, when Indonesia was for decades ruled by the iron fist of former president Suharto.

By late afternoon protesters had blocked the toll road alongside parliament and torn down part of the fence. As several demonstrators attempted to break in, police fired rounds of teargas and water cannon.

After being pushed back from the building some protesters burned tyres and damaged a police post by a nearby bridge. At least three people have reportedly been arrested in Jakarta.

By nightfall at least 100 protesters remained, singing and waving the Indonesian flag, while some managed to tear down the parliament gates.

Similar protests unfolded in various cities across Java and the islands of Sumatra and Sulawesi, where police also used teargas to disperse the crowd. At least 40 protesters have been hospitalised with injuries in South Sulawesi, and 28 in Palembang, South Sumatra.

The parliament had initially scheduled to pass the proposed criminal code on Tuesday, but has faced mounting pressure to delay.

Human Rights Watch has described the draft code as “disastrous not only for women and religious and gender minorities, but for all Indonesians”.

Besides outlawing adultery, and effectively gay sex, the draft code could also result in women who have unlawful abortions being jailed for four years, and would expand the country’s controversial blasphemy law, which has been used to repeatedly prosecute religious minorities. The article that would criminalise insulting the president or Indonesian state, activists feared, could roll back hard-won press freedoms since the fall of Suharto.

In an apparent U-turn, President Joko Widodo announced last Friday that he had ordered parliament to postpone the bill, saying more time was needed to hear revisions, but students around the country feared the government might still attempt to push it through in the final days of their term.

On Tuesday the head of the parliamentary commission overseeing legal affairs confirmed the bill had been postponed and would be carried over to the next set of legislators.