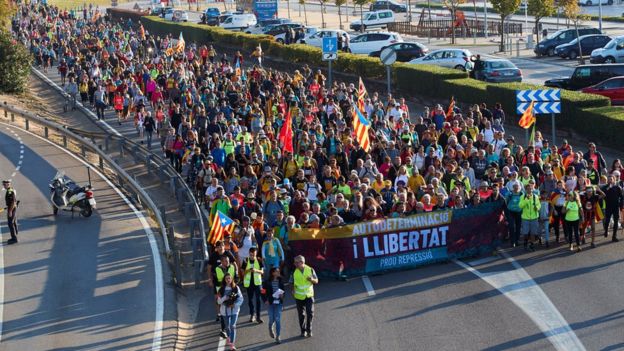 Fresh clashes between riot police and protesters have broken out in Barcelona amid continuing anger over the jailing of Catalan separatist leaders.

A general strike was announced and five marches converged on the city centre, bringing the streets to a standstill.

Meanwhile, Barcelona and Real Madrid football teams postponed a match they were due to play on 26 October.

The famous Spanish rivals had been set to meet in El Clásico - a hugely popular fixture due to be held at Barcelona's stadium - but postponed it because of fears of civil unrest.

What is the latest?

Masked protesters confronted police in the city centre on Friday, throwing stones and cans at lines of officers in riot gear. Rubbish bins were dragged into the streets and set alight.

Further north, Catalan police closed the motorway at La Jonquera on the French border as about 200 protesters occupied the road. Demonstrators blocked at least 20 major roads across the region, reports said.

Earlier, Barcelona's Sagrada Familia church - one of the city's main tourist attractions - was closed after protesters blocked its entrance. In a statement posted on its official Twitter account, the church said a group of protesters was standing at the entrance and interfering with access to the interior.

The Supreme Court decision on Monday to jail nine Catalan separatist leaders set off some of the worst street violence Spain has seen for decades. At least 96 people were hurt as the protests spread across Spain's north-eastern region.

On Wednesday, barricades were set alight and petrol bombs thrown as riots gripped the centre of Barcelona.

A large peaceful demonstration took outside the city's university as hundreds of thousands of other protesters from across the Catalonia region converged on Barcelona.

Why are people protesting?

The protests began after nine pro-independence leaders were jailed for between nine and 13 years by Spain's Supreme Court earlier this week.

The separatists were convicted of sedition over their role in a 2017 referendum outlawed by the Spanish courts and a subsequent declaration of independence. Another three were found guilty of disobedience and fined but not jailed. All 12 defendants denied the charges.

Former Catalan President Carles Puigdemont is still wanted by the Spanish authorities for his role in the referendum. He currently resides in Belgium. If he returns to Spain, he will be arrested.

What is behind the Catalonia unrest?

Catalan nationalists have long complained that their region, which has a distinct history dating back almost 1,000 years, sends too much money to poorer parts of Spain via taxes which are controlled by Madrid.

The wealthy region is home to about 7.5 million people, with their own language, parliament, flag and anthem.

In September, a march in Barcelona in support of Catalonia's independence from Spain drew crowds of about 600,000 people - one of the lowest turnouts in the eight-year history of the annual rally.