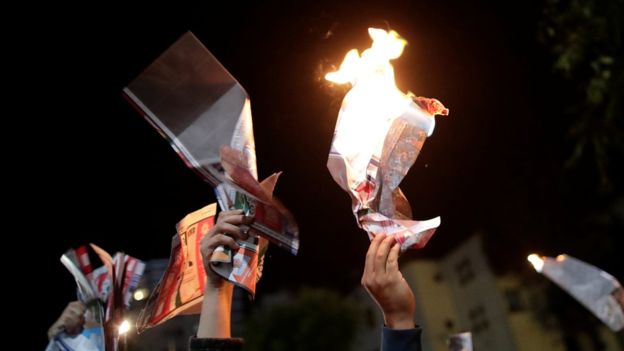 Clashes have broken out in Bolivia as President Evo Morales appeared set to win re-election in controversial circumstances.

Counting was halted on Sunday as it looked as if the vote was heading towards a second round run-off.

But when it resumed President Morales had just enough to win outright. His rival Carlos Mesa says he will not recognise the result.

One set of observers called the change "drastic and hard to explain".

"We hope that the result of the final calculation will adhere to the will of the voters expressed at the poll," the Electoral Observation Mission of the Organisation of American States (OAS).

On Monday, protesters set fire to electoral offices in regions of Sucre and Tarija, according to local media, while in the capital La Paz demonstrators scuffled with police.

On Sunday, the website showing the preliminary results stopped updating at 83.8% of the votes.

Image copyrightREUTERSImage captionProtesters have taken to the streets following the release of a revised count
When the website was updated on Monday, Mr Morales had a lead of 46.85% of votes against Mr Mesa's 36.74%. A 10-point lead means he avoids having to go to a second round in December.

As counting was suspended, Mr Morales told his supporters he was confident that when votes from rural areas were counted, there would be no need for a run-off.

Mr Mesa denounced the revised results. "We are not going to recognise those results that are part of a shameful, consummated fraud that is putting Bolivian society in a situation of unnecessary tension," he said.

Who is Evo Morales?

Mr Morales has been in power since 2006 and became the country's first indigenous president. If he is declared the winner of this election, he will be in power until 2025.

In a referendum in 2016, Bolivians rejected his suggestion to ditch the presidential term limits.

He needed permission from the courts to run this time - his fourth bid for the presidency - as the Bolivian constitution only allows two consecutive terms.

Mr Morales has been praised for his social policies and is popular with many indigenous Bolivians.

He has been applauded for growing the Bolivian economy and cutting extreme poverty however he has been criticised over his environmental policies.

Bolivia has struggled with forest fires this year that destroyed four million hectares of land. Many questioned whether a decree passed by Mr Morales, which quadrupled the amount of land farmers are allowed to clear for agricultural production, contributed to the fires.