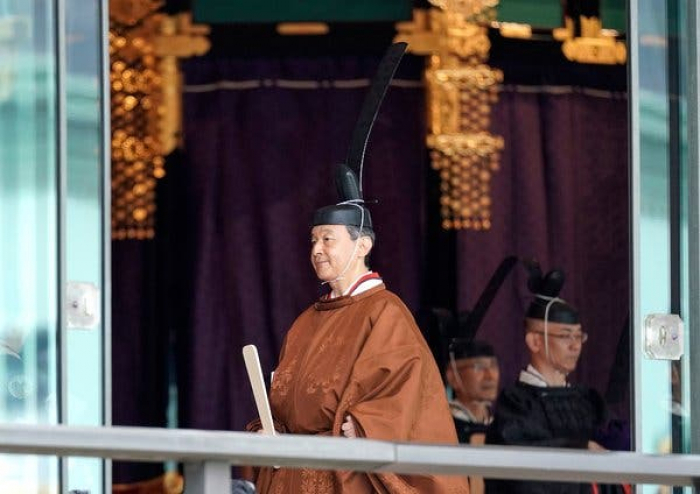 Japan's Emperor Naruhito has officially proclaimed his enthronement, in a ritual-bound, centuries-old ceremony attended by more than a hundred dignitaries from around the world, CNN reports.

The head of state began his reign in May, after his father, Akihito, became the first emperor to abdicate in 200 years. But on Tuesday, Naruhito, 59, announced his change in status to the world, in an elaborate series of rituals known as "Sokui no Rei" at the Imperial Palace in Tokyo.

As the ceremony began, purple curtains were pulled back to reveal Naruhito and his wife, Empress Masako, 55, sitting in two ornately decorated thrones.

Naruhito wore a rust-coloured robe -- just as his father did during his own enthronement in 1990 -- while Masako wore a patterned, white robe and topped her traditional hairstyle with a gilded headpiece. The brother of Emperor Emeritus Akihito, 83-year-old Prince Hitachi, watched the proceedings from a wheelchair.

Reading from a large piece of paper, Naruhito then proclaimed his enthronement before an audience of the imperial family.

"I pledge hereby that I shall act according to the Constitution and fulfil my responsibility as the symbol of the State and of the unity of the people of Japan, while always wishing for the happiness of the people and the peace of the world, turning my thoughts to the people and standing by them," Naruhito said.

"I sincerely hope that our country, through our people's wisdom and unceasing efforts, achieves further development and contributes to the friendship and peace of the international community and the welfare and prosperity of humankind."