After far-right poll gains, knives out again for Merkel 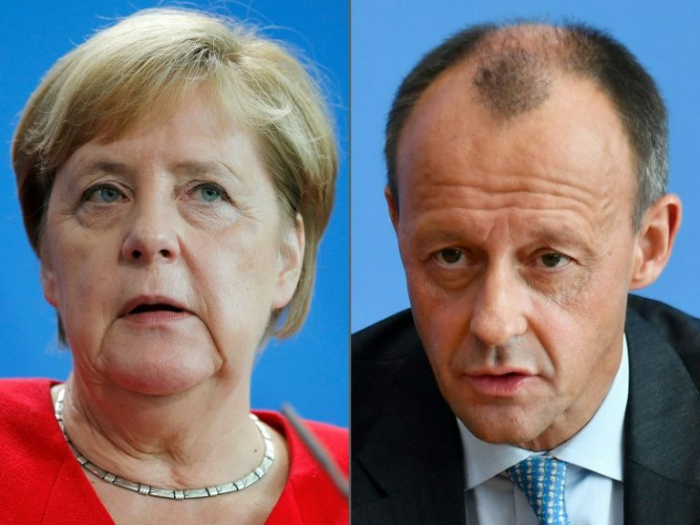 German Chancellor Angela Merkel faces renewed pressure from within her Christian Democrats after the centre-right party was beaten by the populist, far-right AfD in a weekend state election.

Her conservative critics charge that Merkel has dragged the CDU too far to the left on immigration, climate and other issues, allowing the rise of the Alternative for Germany on the extreme right.

A long-time rival who hopes to succeed Merkel, Friedrich Merz, suggested the veteran leader dubbed "Mummy" is already a lame duck and should bow out long before she plans to leave politics in 2021.

In his most direct attack yet, 63-year-old Merz said that "for years the chancellor's inactivity and lack of leadership have covered this country like a blanket of fog.

"I simply cannot imagine that this kind of governance will last another two years in Germany," said Merz, an executive of the German arm of US investment firm BlackRock.

Merkel, in power for almost 14 years, has faced heightened pressure ever since 2015 when she decided to keep open German borders to a mass influx of refugees and migrants.

The move earned her much praise but also sparked an angry backlash that fuelled the rise of the anti-immigration and anti-Islam AfD, now the biggest opposition party.

In recent months it has topped 20 percent in three state polls in the ex-communist east -- most recently Sunday when it narrowly beat Merkel's CDU in Thuringia to second spot behind the far-left Die Linke.

It was the CDU's worst ever result there and seemed to echo the demise of Germany's other mainstream party, the Social Democrats (SPD), which scored just nine percent.

News website Spiegel Online asserted that the state election showed that "the state of the CDU is at least as desolate" as that of the SPD.

The big difference for now was that the CDU remains the party of the chancellor, it said, adding however that "this could easily be missed given that Angela Merkel is barely heard or seen these days".

It was after a similar state poll setback last year that Merkel dramatically handed over the CDU leadership to her preferred successor, Annegret Kramp-Karrenbauer, widely known by her initials AKK.

AKK in a later vote beat Merz for the party chair's position and more recently also took on the post of defence minister, but in recent months her political star has dimmed.

Doubts about AKK have grown after several blunders and gaffes, including a spat with a YouTube personality, a joke about intersex people and a surprise proposal for a peacekeeping mission to Syria that sparked open discord within the cabinet.

Tilman Kuban, head of the CDU's youth wing, which leans towards Merz, this week openly asked whether AKK is the right candidate to lead the party.

Another critic who took aim at both Merkel and her crown princess was parliamentary group co-leader Axel Fischer, who called the latest defeat "the logical consequence of national CDU policies that seems to lack any substance".

An outsider, the Free Democrats' co-leader Wolfgang Kubicki, put it more bluntly, declaring that Kramp-Karrenbauer simply "lacks the stature" to lead the CDU or run for chancellor.

Things are likely to come to a head toward the end of the year, when the SPD will decide whether to stay in Merkel's coalition or leave, which could spark new elections.

Before then, the CDU will face their own fireworks, at a party congress in late November.

Merz has so far held his fire against AKK, preferring to attack the government as a whole.

"The image of the government is simply abysmal," he thundered this week, demanding that "something must change".