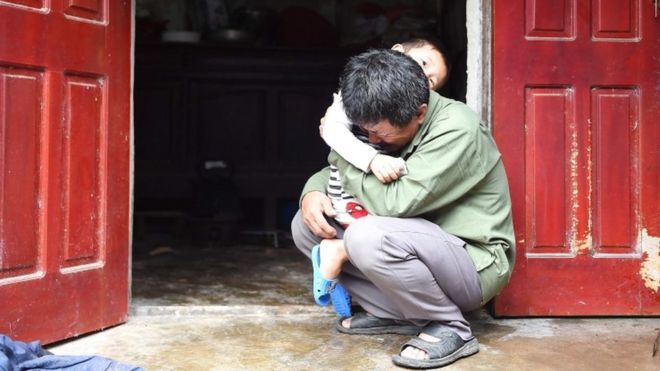 Vietnam says it "strongly condemns human trafficking," after UK police said they believed 39 people found dead in a lorry were all Vietnamese.

The Vietnamese ministry of foreign affairs called on countries around the world to "step up cooperation" to combat the crime.

Vietnamese and British authorities are working to identify the bodies, which were found in Essex on 23 October.

Several arrests have been made in connection with the tragedy.

The driver of the lorry, Maurice Robinson, 25, appeared in court on Monday on manslaughter charges.

Prosecutors alleged that Mr Robinson was part of a "global ring" of people smugglers.

Police are also seeking two brothers from Northern Ireland, Ronan, 40, and Christopher Hughes, 34, who are wanted on suspicion of manslaughter and people trafficking.

Eamonn Harrison, 22, has been arrested in Dublin on a European Arrest Warrant to face charges of manslaughter in the UK.

In Vietnam police have arrested two people over people smuggling.

Le Thi Thu Hang, a spokesperson from the ministry, said the incident in Essex was "a serious humanitarian tragedy".

Image captionPham Thi Tra My and Nguyen Dinh Luong's families are concerned they may be among the victims
"Vietnam calls upon countries in the region and around the world to step up cooperation in combating human trafficking in order to prevent the recurrence of such tragedy," she said.

"We hope that the British side would soon complete the investigation to bring those responsible for this tragedy to justice, " she added.

A number of Vietnamese families have come forward fearing their loved ones are among the dead.

On the night before the bodies were discovered, Pham Thi Tra My, 26, sent her family a message saying her "trip to a foreign land has failed".

Vietnamese feature prominently among those identified as potential victims of trafficking in the UK, according to a report by Anti-Slavery International.