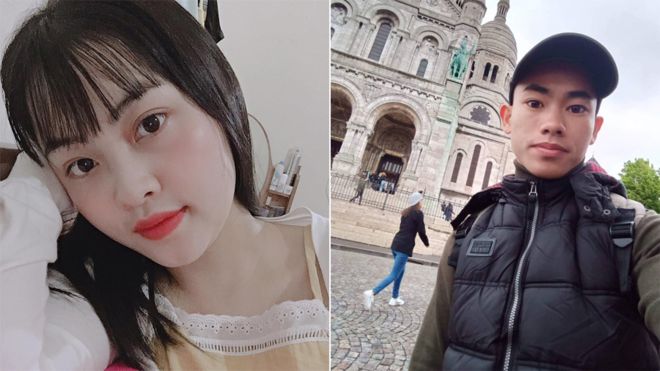 Eight suspects have been held in Vietnam after 39 people were found dead in a lorry in Essex.

The arrests came as a team of Vietnamese officials arrived in Britain to help formally identify the 31 men and eight women.

The suspects are being held in relation to people smuggling offences, the director of police in the Nghe An province in north-central Vietnam said.

Two people were arrested in the Ha Tinh province of Vietnam last week.

The victims were discovered in a refrigerated lorry trailer on an industrial estate in Grays on 23 October.

On Friday, Essex Police said all 39 people were believed to be Vietnamese.

The force initially said it believed they were Chinese.

Essex Police said it was now in "direct contact with a number of families in Vietnam and the UK" and the Vietnamese Government.

A spokeswoman for the country's Ministry of Foreign Affairs called the incident a "serious humanitarian tragedy".

Post-mortem examinations are being carried out on the victims to establish the cause of their deaths.

More than 100 people attended a service for the victims at the Church of the Holy Name and Our Lady of the Sacred Heart in east London on Saturday evening.

The driver of the lorry, Maurice Robinson, from Northern Ireland, appeared in court last week charged with a string of offences, including 39 counts of manslaughter.

Extradition proceedings have also begun against 22-year-old Eamonn Harrison, who was arrested in Dublin on a European Arrest Warrant.

Police are also seeking two brothers from Northern Ireland, Ronan and Christopher Hughes, who are wanted on suspicion of manslaughter and people trafficking.