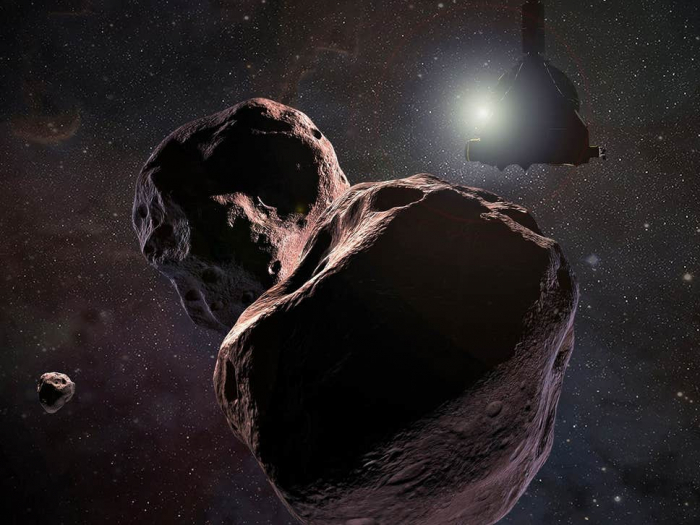 Nasa has renamed a distant space rock after a controversy over the old name's Nazi connections.

The object was previously known as Ultima Thule. That name was chosen to mean something like "farthest place", but immediately attracted controversy because "Thule" is a word that has been associated with Nazis in the past.

The rock – which was studied in the farthest flyby ever conducted by a spacecraft – will now be known as Arrokoth, a Native American term that means sky, the space agency said.

The new name comes from the Powhatan/Algonquian has been chosen in co-operation with Powhatan Tribal elders, Nasa said. It was proposed by members of the New Horizons team, who led the mission to study the object and presented the new name to the International Astronomical Union and Minor Planet Center, which officially names and categorises Kuipter Belt objects.

The new name frees the object of its associations with Nazi occultists, which have brought criticism ever since it was announced.

Nasa chose the name in keeping with a Latin metaphor, used to describe places that were so far away they were entirely unknown. It has appeared on maps for centuries.

But "Thule" has been taken up as part of Nazi mythology, supposedly describing the place where the Aryan race began. The German Thule Society was a key part of historical Nazi thought, and the word is still used by neo-Nazis and the alt-right today.

Those in the New Horizons team who chose the old name said they knew about the controversial links but chose to defend the name despite those connections. "Just because some bad guys once liked that term, we’re not going to let them hijack it," the team's principal investigator Alan Sterns said at a press conference when asked about the controversy.

Nasa aid that the old name had always been temporary – referring to it as a nickname – and that the new one would be used permanently and officially.

The team chose the new word to associate the object with the culture of the people who lived in the region where the object was discovered. Both the Hubble Space Telescope that first spotted it and the New Horizons mission that flew past it are run from Maryland, and the Chesapeake Bay region is closely associated with the Powhatan people, who permitted Nasa to use the word.

"We graciously accept this gift from the Powhatan people," said Lori Glaze, director of NASA's Planetary Science Division. "Bestowing the name Arrokoth signifies the strength and endurance of the indigenous Algonquian people of the Chesapeake region. Their heritage continues to be a guiding light for all who search for meaning and understanding of the origins of the universe and the celestial connection of humanity."

Nasa also said the naming convention helped reflect the spirit of the mission.

"The name 'Arrokoth' reflects the inspiration of looking to the skies, and wondering about the stars and worlds beyond our own," said Alan Stern, New Horizons principal investigator from Southwest Research Institute, Boulder, Colorado. "That desire to learn is at the heart of the New Horizons mission, and we're honored to join with the Powhatan community and people of Maryland in this celebration of discovery."

The object now known as Arrokoth is one of thousands of small icy worlds found in the Kuiper Belt, which sits in the distant solar system out beyond our Earth and its other planets. It was first seen by the Hubble Space Telescope in 2014.

Nasa engineers then used the New Horizons mission to fly past the world, after its pioneering mission to the Pluto system. It flew by on New Year's Day in 2019

"Data from the newly-named Arrokoth, has given us clues about the formation of planets and our cosmic origins," said Buie. "We believe this ancient body, composed of two distinct lobes that merged into one entity, may harbour answers that contribute to our understanding of the origin of life on Earth."