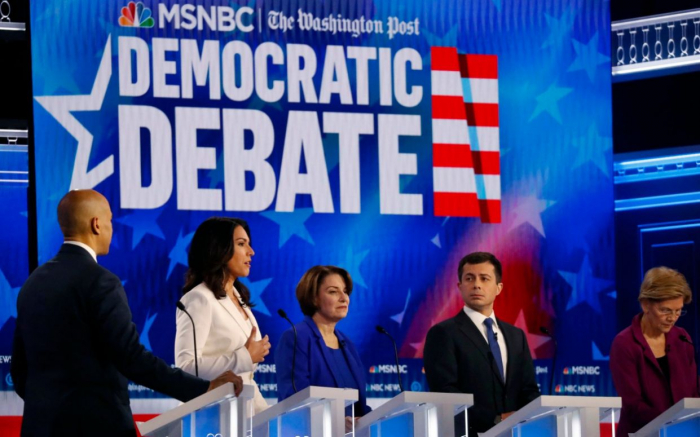 1. Everyone sought an impeachment bounce

The debate began with impeachment, in a nod to the fact that Capitol Hill was where the day's big news was coming from, and the candidates came prepared.

Elizabeth Warren latched on to the background of Gordon Sondland, the Trump donor turned diplomat whose testimony dominated Wednesday's headlines, to boost her campaign.

She challenged others on the debate stage to match her promise not to give big donors plumb ambassadorships, thereby reinforcing her central theme of taking on the elites.

Joe Biden, the joint front-runner with Ms Warren, sought to flip Mr Trump's attacks on him over Ukraine - which triggered the impeachment inquiry - by saying it showed the president wanted to stop him being the nominee.

Meanwhile Kamala Harris, the California senator, widened the debate by saying Mr Trump's actions underscored the need to establish justice in America - the central message of her White House bid.

The pivots showed an understanding for the country's media dynamics which will come in handy if they end up battling Mr Trump, an arch media manipulator, for the White House.

The 37-year-old mayor of South Bend, Indiana, has been one of the stories of the campaign so far, dwarfed in terms of political experience by other rivals but building up steam.

Recent polls have put him in the lead in both Iowa and New Hampshire - the first two states to vote for the Democratic presidential candidate - meaning he is now a serious contender.

However throughout this year he has struggled to pick up support from African-Americans, stubbornly remaining in the low single digits on voting intentions among that group.

Tackling the issue head on when challenged, Mr Buttigieg said that he not only wanted to talk about "what's in my plan" to produce greater racial equality but "what's in my heart".

"I do have the experience of sometimes being a stranger in my own country," Mr Buttigieg said, an apparent reference to his homosexuality and the challenge of coming out.

He also lent on his Christian faith, saying that he was taught to reach out and care for the "marginalised, caste aside and oppressed". It was both a tacit acknowledgement of the political weakness and an attempt to fix it.

3. The ghosts at the Democratic feast

Their names were barely mentioned, but the spectre of two new candidates and their disruptive potential hung over Wednesday night's proceedings.

Mike Bloomberg, the former mayor of New York, has not yet formally fired the starting gun but has put his name down in states that had early deadlines and is on manoeuvres.

Deval Patrick, the African-American former governor of Massachusetts, announced his bid last week despite less than three months to go before the first votes are cast in Iowa.

Both men are unknown quantities and pose a threat especially to those candidates on the party's moderate wing, seeking to defeat the left-wing Ms Warren and Bernie Sanders.

Mr Bloomberg certainly has the resources to upset the status quo and is set to use some of his billions on Super Tuesday, when 14 states vote, and avoid Iowa and New Hampshire.

If either candidate builds momentum the loser could be the former vice president Mr Biden, 77, who has enjoyed a lead in national polls throughout the year but is seen as vulnerable.

The congresswoman from Hawaii has been generating headlines and raising eyebrows for the wrong reasons in recent weeks - just what is her goal in this presidential campaign?

Her bid for the White House has followed path that has increasingly alarmed some Democrats, railing against the party's structure while presenting an unusual policy platform.

On Wednesday, Ms Gabbard, 38, again showed her willingness to take on rivals on the stage and the Democratic Party itself with a vigour that few others displayed.

She accused Mr Buttigieg of wanting to send troops into Mexico to tackle drug cartels, saying that would be a reckless use of America's military power.

"That is outlandish even by the standards of today's politics," he shot back, saying he would not invade Mexico and mentioning her infamous meeting with Syrian dictator Bashar al-Assad.

5. Comedy shines through with familiarity

For the 10 candidates on stage in Atlanta, Georgia, the debate setup has fast become routine. There have been five debates already this year, with another one next month.

The familiarity has some downsides - the candidates are now so used to their policy pitches and 'why I want to be president' routines that they can sound staged.

But one feature which shone through on Wednesday was more humour than usual, perhaps as a result of the ease which candidate now have under the bright debate lights.

Andrew Yang, a tech entrepreneur who has shown surprising staying power in this race, was asked what he would tell Vladimir Putin if he became president.

“First I’d say 'sorry I beat your guy'”, came the reply - a jibe at Russia's attempt to tip the scales in Mr Trump's favour in the 2016 presidential race which drew laughs.

When Mr Biden used a response about Kim Jong-un to note the North Korean leader wanted to beat him to death with a stick, Mr Sanders jumped in: "Other than that, you like him."

And then there was Amy Klobuchar, the senator from Minnesota, who boasted about her proudest fundraising record yet: “I raised $17,000 from ex-boyfriends."