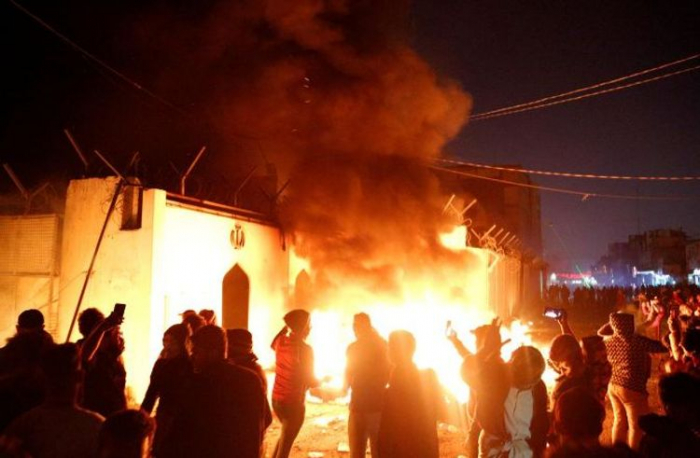 Iraqi protesters stormed the Iranian consulate in the southern city of Najaf and set fire to the building on Wednesday bringing a new level of violence to demonstrations aimed at the downfall of a government-backed by Tehran, AzVision.az reports citing Reuters.

It was the strongest expression yet of the anti-Iranian sentiment of Iraqi demonstrators, who have taken to the streets for weeks in Baghdad and the Shi’ite Muslim-majority south - and have been gunned down in their hundreds by Iraqi security forces.

Staff at the consulate had evacuated shortly before demonstrators broke in, police and civil defense first responders said. There were no immediate reports of casualties.

The protests that began in Baghdad on Oct. 1 and have spread through southern cities are the most complex challenge facing the Shi’ite-dominated ruling class that has controlled state institutions and patronage networks since the 2003 U.S.-led invasion that toppled Sunni dictator Saddam Hussein.

Young, mostly Shi’ite protesters say politicians are corrupt, beholden to foreign powers - especially Iran - and blame them for a failure to recover from years of conflict despite relative calm since the defeat of Islamic State in 2017.

Protesters blocked roads with burning tyres in southern Iraq and clashed with police in Baghdad earlier on Wednesday, aiming to use economic disruption as leverage to push the government from power and root out state corruption.

Security forces shot dead two people in Kerbala, near Najaf, overnight and two in Baghdad on Wednesday, while a fifth person died when security forces opened fire during protests in the southern oil capital of Basra.

Demonstrators prevented government employees getting to work in Basra by installing concrete barriers painted as mock-up coffins of relatives killed in weeks of unrest, a Reuters witness said.

Authorities have warned against exploitation of the unrest by armed groups, especially should protest-related violence spread to northern Iraq, where IS militants are waging an insurgency.

The Sunni extremist group on Thursday claimed three bomb blasts in Baghdad overnight which killed at least six people, although they provided no evidence for the claim.

Government reform has amounted to little more than a handful of state jobs for graduates, stipends for the poor and pledges of election reform which lawmakers have barely begun to discuss.

“First we were demanding reform and an end to corruption,” said Ali Nasser, an unemployed engineering graduate protesting in Basra.

“But after the government started killing peaceful protesters we won’t leave before it’s been toppled together with the corrupt ruling class.”