One thousand tractors roll into Paris for farmer protest 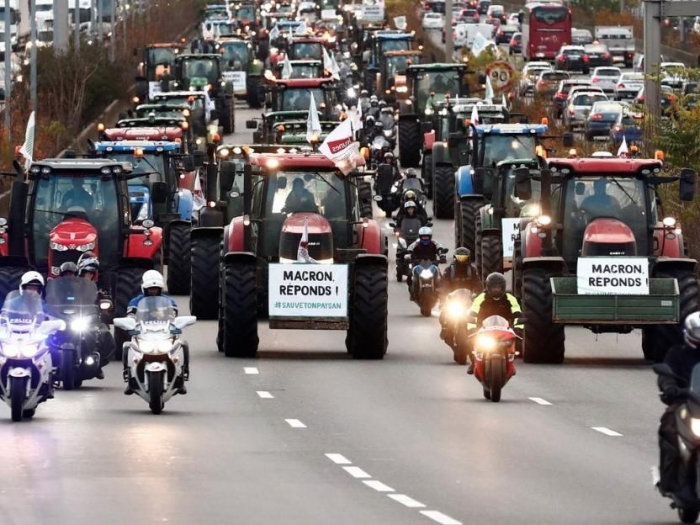 French farmers have driven a convoy of up to a thousand tractors into Paris as part of a protest against the government’s agricultural policies.

The two main farm unions organising the unrest blame stagnant revenues, the phasing out of certain pesticides and what they claim is unfair competition.

They could remain there for “hours, or maybe days”, she added.

By mid-morning, blue and green tractors bearing signs reading “Respond, Macron!” had advanced towards the southwestern edge of the city, taking up two lanes of the highway as police escorted them on motorcycles. They then stalled on the Paris ring road, where some protesters have pitched tents and lit fires.

Protesters on foot inside the city, meanwhile, have blocked off the Champs-Elysees and scattered hay across the famous Paris avenue.

The French presidency office said no meeting between Mr Macron and a delegation of farmers was planned at this stage.

Farmers’ grievances include free trade agreements they say put them at a disadvantage, a government reform that failed to increase their revenues, and regulations they say hinder the sector’s performance.

Damien Greffin, president of the farmers’ union for the Paris region, placed the blame for farmers’ woes squarely on Mr Macron, whom he called the “instrument of these divisions” in an interview with BFM TV. He called on Mr Macron to rally French citizens to support agricultural workers.

Minister of food and agriculture Didier Guillaume told Europe 1 radio Wednesday that he supports “their anger and their protest”.

He added that “enough is enough” of “permanent denigration” and the gulf between city residents and farmers.

The main farmers’ union has organised actions throughout the country, including a similar tractor protest in Lyon.

Paris and Lyon police have advised cars to stay off the affected roads.

The demonstrations in France follow similar protests in Germany Tuesday, when some 10,000 farmers drove 5,000 tractors into Berlin to protest the German government’s agricultural policies. Farmers in the Netherlands clogged highways last month to decry what they said was unfair blame for nitrogen pollution in the country.

And in Dublin, farmers shut down busy parts the city centre for a second successive day to protest against low beef prices and climate change initiatives they say unfairly target them.

The new EU Commission president on Wednesday guaranteed that farming would continue to be at the heart of the bloc.

Ursula von der Leyen told the EU plenary in Strasbourg that agriculture, which long absorbed half the EU budget before slowly tapering off, “will remain a valued part of our culture and our future”.

In her speech hours before she was slated to be confirmed by the parliament, she promised “capital access to young farmers” to beef up their income, and insisted she would act against unfair global competition which the European farmers increasingly fear will undercut domestic prices. She said that EU trading partners “must comply with the EU environmental standards” if they want to import farm products.

France is the biggest beneficiary of subsidies under the EU’s Common Agricultural Policy, as it is the largest agricultural producer in the EU.