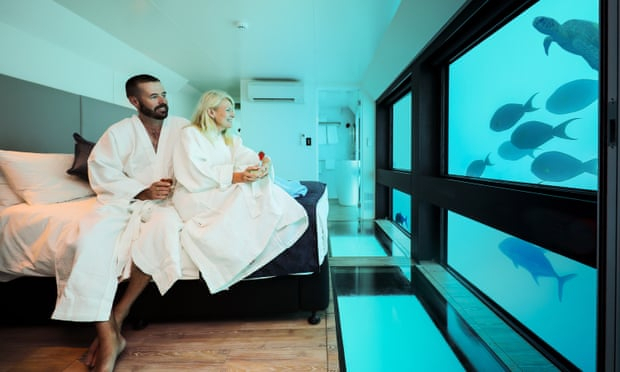 For $799 a night, tourists now have the opportunity to live out a Finding Nemo dream or a Dead Calm nightmare on the Great Barrier Reef.

From 1 December, Reefsuites, a pair of underwater hotel rooms, will open to visitors.

Described as an “intimate experience that will stay with you forever” the Reefsuites look out onto Hardy Reef, an area that is in recovery from both damage sustained during the catastrophic Cyclone Debbie in 2017 and mild coral bleaching.

Both ensuite rooms feature floor-to-ceiling windows; allowing customers to look out into a vast world of water, glowing an alien shade of turquoise, while they contemplate the fragility of both nature and humanity. By night, guests can turn on a light to observe nearby underwater life, while the endless black expanse of the ocean presses in around them.

The submerged rooms are part of Reefworld Pontoon, a $10m structure built to replace tourism operator Cruise Whitsunday’s original pontoon on Hardy Reef, which was damaged during the cyclone.

This may be Australia’s first underwater hotel development, but it will not be its last. In June the Queensland government backed plans for a three-level pontoon and underwater hotel near Lady Musgrave Island on the southern end of the Great Barrier Reef.

While it may be a first for Australia, underwater hotels already operate in Dubai, the Maldives and Tanzania.

In a statement, Jones said: “This will be one of the most iconic tourism experiences in Australia.”