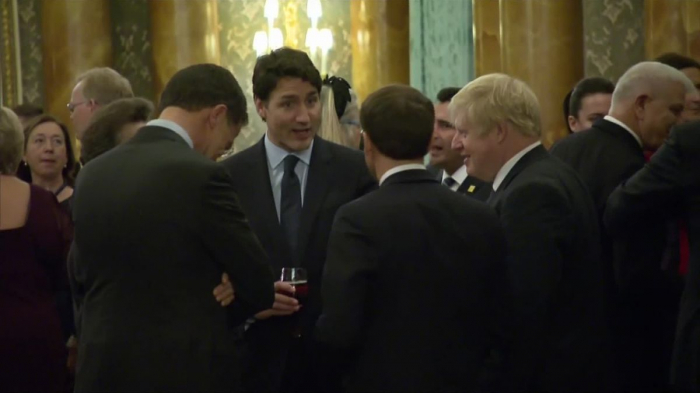 A video has emerged that appears to show world leaders including Boris Johnson, Justin Trudeau and Emmanuel Macron joking about Donald Trump at the opening of this week’s Nato summit in London.

Footage shows the leaders at a function at Buckingham Palace on Tuesday evening. Johnson asks Macron: “Is that why you were late?” before Trudeau interjects: “He was late because he takes a 40-minute press conference off the top”.

Trudeau adds: “Oh, yeah, yeah yeah. He announced … ” before he is cut off by Macron, who speaks animatedly to the group. Macron’s back is to the camera and his words are inaudible.

It is never said whom the group are talking about, but the exchange could relate to the US president, who is known for his long, rambling press conferences and who had an unscripted 50-minute back and forth with reporters on Tuesday.

As he did at last year’s Nato meeting, Trump has thrown out normal summit protocol and used his appearances with allied leaders to field dozens of questions from the world’s media.

The Queen hosted world leaders at a reception at Buckingham Palace on Tuesday night to mark 70 years of Nato cooperation, as protesters gathered outside, rallying against Trump and his perceived interest in the NHS in a US-UK trade deal and Nato.

After an edited cut in the film, the footage later shows an incredulous Trudeau telling the group, which also included Mark Rutte, the prime minister of the Netherlands, and Princess Anne: “You just watched his team’s jaws drop to the floor.”

Again, it is not known whom the group are talking about, and none of the world leaders appeared to realise the conversation was being recorded.

The video was originally posted online by Sputnik News, a news agency established by the Russian government-owned news agency Rossiya Segodnya. A much longer version of the video on Sputnik’s Facebook page shows more of the interactions between guests at the reception.

An edited version of the video, focusing on the interactions between these leaders, with the audio cleaned up and subtitles added, was posted on Twitter by the Canadian Broadcasting Corporation on Wednesday.

The footage emerged after a day when Nato disunity was on full display, as Macron accused Turkey of colluding with Islamic State proxies, and Trump described Macron’s criticisms of Nato’s “brain death” as insulting and “very, very nasty”.

On Wednesday, Trump is scheduled to meet the German chancellor, Angela Merkel, and the prime minsters of Denmark and Italy. He is also due to give another news conference, this time on his own, after the 29 Nato leaders hold a full three-hour closed-door summit session and issue a statement to celebrate their supposed unity.

The Turkish president, Recep Tayyip Erdoğan, has threatened to hold up Nato efforts to bolster the protection of the Baltic republics against Russia unless the allies brand the Kurdish militias who defeated Isis in Syria as “terrorists”.

Amid fears Erdoğan could even veto the summit declaration and with barely two hours to go before the leaders sat down for their sole roundtable discussions, the Nato secretary general, Jens Stoltenberg, admitted a solution to the issue had still not been found.

“I’m confident that we will be able to find a solution to the issue related to updating the revised defence plans,” Stoltenberg said as he arrived for the summit at a luxury golf hotel on the outskirts of London. “I discussed this with President Erdoğan last night and we are working on the issue as we speak.”

Johnson played down the dispute. “There is far, far more that unites us than divides us, and I think one thing every leader here is absolutely resolved upon is the vital importance of Nato for our collective security,” the prime minister said as he arrived.