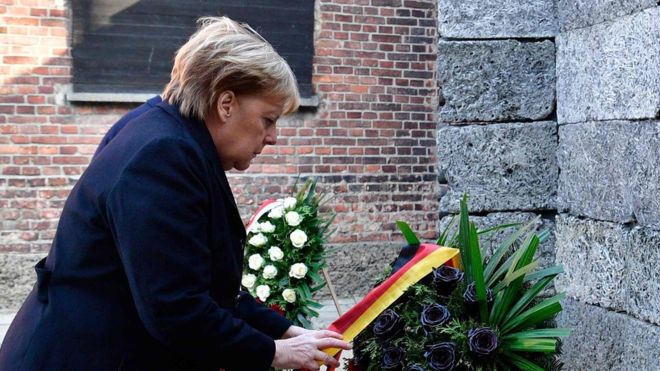 Chancellor Angela Merkel has said Germany has an unending responsibility to remember the Nazis' war crimes, as she made her first trip while in office to the Auschwitz death camp in Poland.

The responsibility was "part of our national identity", she said.

Her visit comes amid a rise in German anti-Semitism and ahead of the 75th anniversary of the camp's liberation.

The Nazi regime murdered an estimated 1.1 million people, the vast majority of them Jewish, at Auschwitz-Birkenau.

What did the chancellor say?

She walked through the notorious "Arbeit macht frei" (work sets you free) gates at Auschwitz and then held a minute's silence at the so-called Black Wall, where thousands of prisoners were executed

She then moved to the Birkenau site where she gave her speech.

"Remembering the crimes... is a responsibility which never ends. It belongs inseparably to our country," Mrs Merkel said.

"To be aware of this responsibility is part of our national identity, our self-understanding as an enlightened and free society... a democracy."

Germany continued to have "deep shame" for what happened in Auschwitz-Birkenau.

"There are no words to express our sorrow," Mrs Merkel said.

"I bow my head before the victims of the Shoah," she told the gathered Holocaust survivors.

Mrs Merkel also acknowledged the rise of anti-Semitism in her country, saying to combat it "the history of extermination camps has to be shared".