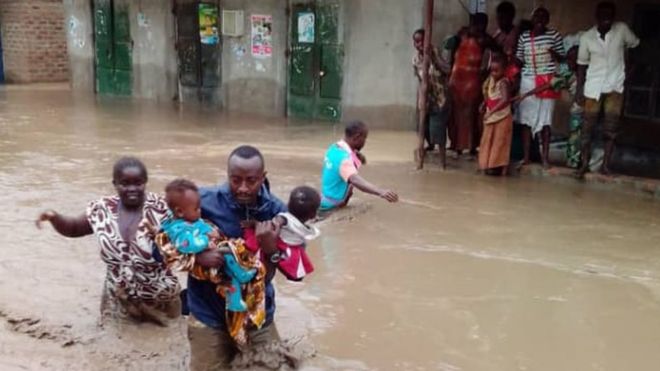 Flooding in Uganda has claimed at least 16 lives, the Red Cross says, as the region reels from weeks of rain, AzVision.az reports citing BBC News.

Rescuers have been recovering the bodies of victims swept to their deaths by the flash floods in the western Bundibugyo area, the aid group said.

Homes have been washed away and a number of roads blocked or destroyed.

Large parts of east Africa have suffered floods and landslides in recent weeks. Hundreds have died and millions have been displaced.

The events have been linked to an unusual weather phenomenon in the Indian Ocean,

Meanwhile, in Somalia, the authorities are trying to assess the damage caused by tropical storm Pawan, which brought wind and torrential rain to part of the northern coast on Saturday, cutting communications with the town of Eyl.

Heavy rain has been battering the country for weeks, and intensified overnight on Friday into Saturday.

Police, military, aid agencies and community members are assisting with search and rescue operations in more than a dozen affected areas.

The Red Cross said its volunteers continued to recover more bodies, including some trapped in cocoa trees in the Bundibugyo hills, describing the events as "devastating".

Last week landslides caused by heavy rain claimed a number of lives in the east of the country.

Uganda's disaster management agency has advised people not to walk, ride or drive across any flooded roads or bridges, and to keep away from river banks and steep slopes.