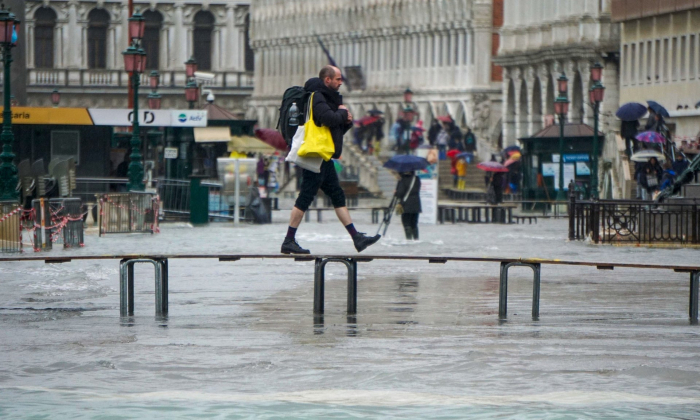 The EU will attempt to revive the world’s flagging attempts to tackle the climate crisis with a historic proposal from Brussels to halve emissions by 2030, and reach net zero carbon by mid-century, the Guardian reports.

Wednesday’s announcement is seen as the vital first step towards gathering a “coalition of ambition” among key countries to fulfil the pledges of the 2015 Paris agreement, which is in danger of languishing amid deadlocked UN talks.

Ursula von der Leyen, the new president of the European commission, writing in the Guardian on Tuesday, said: “Science is telling us we are running out of time. The new European commission is wasting no time. Our goal is to become the first climate-neutral continent by 2050, slowing down global heating and mitigating its effects. This is a task for our generation and the next, but change must begin right now – and we know we can do it.”

The proposals will be aired on Wednesday lunchtime in Brussels followed by a debate in the EU parliament, and the 2030 target will be a signal of intent rather than a formal commitment at this stage. But negotiators are keen to take a strong position in the final days of the UN talks in Madrid, which have lacked much sense of urgency.

Her intervention – seen as a game-changer by experts – comes as the talks on implementing the Paris agreement stalled, with nations wrangling over small print on details such as carbon markets. Negotiators have largely ignored the key question hanging over these talks: how to ensure governments strengthen their targets to cut greenhouse gas emissions in line with scientific advice.

Current targets under the 2015 Paris accord would lead to more than 3C of warming, which would cause irreparable harm and violate the core Paris goal of holding global heating to no more than 2C above pre-industrial levels, with an aspiration to hold to 1.5C. Global temperatures have already risen about 1.1C.

To fulfil the pledges they made in Paris, nations must step up in the next year with new targets for emissions for 2030. Global carbon emissions are now 4% above the levels they were in 2015 when the Paris accord was signed. According to scientific advice, to stay within 1.5C the world must begin cutting emissions in the next year and reduce them by more than 7% a year for the next decade.

In becoming the first major economic bloc to propose a 2030 and 2050 goal, the EU is hoping to galvanise other key countries such as China and India into making similar commitments to curb greenhouse gases by 2030, and so rescue the Paris agreement.

While 68 other countries have also come forward with 2030 pledges, most are small economies and the world’s big emitters – the US, China, India, Japan and others – have remained on the sidelines.

The US is in the process of withdrawing from Paris, though the Democratic presidential hopeful Michael Bloomberg led a delegation in Madrid promising to continue action on the climate.

All eyes are now on China, as the EU will try to woo Beijing with promises of trade negotiations and the lure of joint investments. There may be sticks as well as carrots: Frans Timmermans, the EU vice president, said he would be “at the disposal of any country that wants to talk to us” about targets, but added the EU would “not hesitate” to impose measures such as carbon tariffs on imports from countries without strong Paris commitments.

The EU’s move was hailed as a potential “game-changer” by David Waskow, international climate director at the World Resources Institute. “This announcement could have a galvanising effect for numerous other countries to step up their efforts to tackle climate change.”

Todd Stern, former White House climate chief at the Paris negotiations, commended the EU’s move: “What the world most needs right now is a clear recognition of the scale and speed of decarbonisation we need, a clear plan to produce that transformation, and the political will to do what it takes. Europe has always been a climate leader and looks ready to take that leadership to the next level.”

Laurence Tubiana, chief executive of the European Climate Foundation and the French official who led the Paris agreement, said: “[This will] have a major impact. If one of the largest economies and largest trading bloc moves to climate neutrality by 2050, this sends a strong signal to markets and players across the globe.”

The commission’s proposals still face opposition from a few countries – Poland, the Czech Republic and Hungary – that are concerned over economic losses from moving away from coal, and the proposals on emissions cuts for 2030 may take time to finalise. Von der Leyen promised €100bn funding for a “just transition” to help countries.

Green campaigners also want to see higher targets for 2030, and want the EU to confirm its commitments sooner. Jennifer Morgan, executive director of Greenpeace International, told the Guardian: “To be truly credible and consistent with staying below 1.5C, the EU needs to commit to increasing its 2030 commitment to 65% [emissions cuts]. This is what’s needed to be taken seriously by China in the lead-up to the EU-China summit in autumn next year.”

Green campaigners are also worried that the EU will not finalise its commitments until late next year, but the Commission is confident that by signalling its intent now it can form alliances with other key countries to come up with the joint pledges needed at next year’s crunch conference in November in Glasgow. That is the deadline for new commitments on emissions to fulfil the Paris accord.