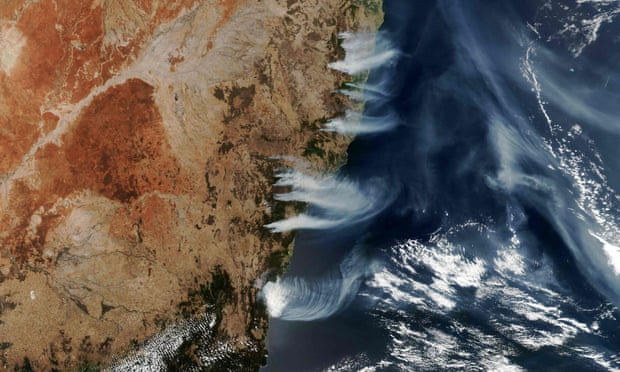 Bushfires in New South Wales and Queensland have emitted a massive pulse of CO2 into the atmosphere since August that is equivalent to almost half of Australia’s annual greenhouse gas emissions, Guardian Australia can reveal.

Analysis by Nasa shows the NSW fires have emitted about 195m tonnes of CO2 since 1 August, with Queensland’s fires adding a further 55m tonnes over the same period.

Experts say the pulse of CO2 from this season’s bushfires is significant, because even under normal conditions it could take decades for forest regrowth to reabsorb the emissions.

But scientists have expressed doubt that forests already under drought stress would be able to reabsorb all the emissions back into soils and branches, and said the natural carbon “sinks” of forests could be compromised.

The figures were provided to Guardian Australia by Dr Niels Andela, a scientist at the Nasa Goddard Space Flight Center and a collaborator in the Global Fire Emissions Database.

The GFED uses data from satellites that have detected fire hot spots and combines it with historic estimates of emissions from fires.

Andela stressed the estimates did come with large uncertainties, as the methodology was still under development, but he said it was “widely applied”.

More than 2.7m hectares of land has been burned in this NSW bushfire season, with authorities warning there will be more fires with little prospect of rain in coming months.

Separate GFED data provided to Guardian Australia on “active fire detections” from Nasa satellites shows the remarkable early start and large extent of fires in the NSW fire season compared with the past 15 years.

Andela said CO2 emissions from fires in grasslands and savannas are absorbed in only a few years, but it can take many decades for forested areas to regrow and absorb CO2 that was lost in blazes.

He said fires could also shift vegetation patterns of ecosystems that were already under stress.

Forests are regarded as a store – or sink – for carbon, by taking up CO2 as they grow and storing it as carbon in branches and soils.

Dr Pep Canadell, of the CSIRO climate science centre and the executive director of the Global Carbon Project, said: “This pulse of fire emissions should indeed be of concern. Any additional carbon emissions to the atmosphere, with no guarantee that it will be removed back by regrowing vegetation in a later stage, is of concern, particularly in an Australia under climate change.

“Thus, it is important to understand both risks – the emissions from fires but also the potential long-term loss of CO2 sink capacity of the terrestrial vegetation due to the incomplete recovery of burned landscapes due to permanent degradation. These emissions are very significant.”

He said the long-term average of emissions from fires in Australia was about 380m tonnes of CO2 per year, but he said NSW was a minor contributor to this total, with most emissions coming from the Top End, “where thousands of savanna fires take place every year”.

He said that in an average year, emissions from NSW would contribute no more than 5% to the Australia-wide total.

In Australia’s greenhouse gas inventory, the government reported 340m tonnes of emissions from “wildfires” each year for the whole country from 2013 to the latest reporting year of 2017.

Emissions from bushfires are considered to be neutral because when forests regrow after fires, they absorb a similar amount of CO2 as they did when they burned.

But Canadell said this was “most likely an optimistic view of the world” because it didn’t consider that many burned areas never recovered to their prefire state “and therefore never end up accumulating as much carbon as they had before.”

He said in some cases, such as the Tasmanian fires of 2015, peat that was burned “may take thousands of years to recover the carbon if the climatic conditions are suitable – the latter an unlikely assumption under the rapid climate changes we are already observing and are predicted.”

Prof David Bowman, a fire ecologist at the University of Tasmania, said that under normal conditions the regrowth would reabsorb the CO2. But he said the ongoing drought, combined with climate change, meant conditions were not normal.

“This is a nasty negative feedback cycle of a biosphere carbon sink becoming a source [of carbon].”