Why has India's Assam erupted over an 'anti-Muslim' law? 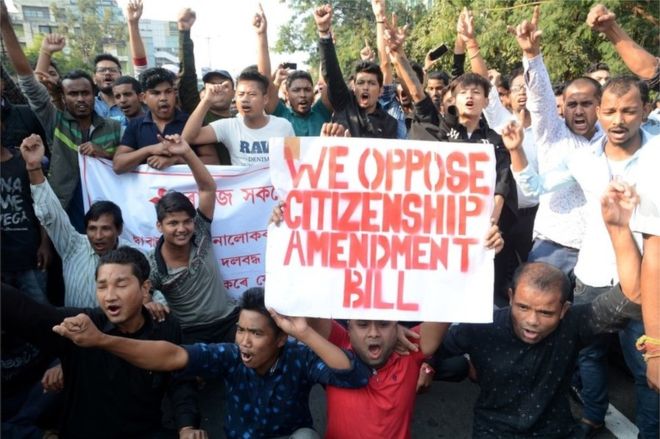 Assam, a picturesque tea-growing state in India's north-east, is on the boil over a controversial new citizenship law that would make it easier for non-Muslim minorities from three neighbouring countries to seek Indian citizenship.

Thousands of troops have been deployed, a curfew imposed and internet services suspended, in efforts to quell the mass protests taking place in some areas of the state. There have been pitched battles between police and demonstrators. At least two people have died and seven policemen have been injured in clashes.

But the protests in Assam - the first in the country after the bill was passed - have little to do with concerns about the exclusionary nature of the bill and the threat to secularism.

They have more to do with indigenous fears about being demographically and culturally swamped by "outsiders".

One reason for the tensions is that Assam is one of India's most complex and multi-ethnic states. Assamese and Bengali-speaking Hindus live here, as do a medley of tribespeople. A third of its 32 million residents are Muslims, the second-highest number in any part of India after Indian-administered Kashmir.

It is also one of India's most fragmented and troubled regions: four north-eastern states have been carved out of Assam and three groups of tribespeople living there want to break away and form their own states.

Residents have clashed over linguistic identity and citizenship. The Assamese and Bengali-speaking people have fiercely competed to control jobs and resources, often ignoring the legitimate claims and aspirations of the indigenous tribespeople who have lived there for centuries.

Then there's the illegal immigration from neighbouring Bangladesh that has been a serious concern there for decades now.

Assam shares a nearly 900km (560-mile) long border with Bangladesh, and both Hindus and Muslims have trickled in, some fleeing religious persecution and others looking for jobs. Estimates of illegal foreigners in the state range from four million to 10 million.

A six-year anti-foreigner protest in the 1980s - during which hundreds of people were murdered - led to a 1985 pact between the federal government and protesters. It was agreed that anyone who entered Assam without proper documentation after 24 March 1971 would be declared a foreigner and deported.

However, when nothing much changed over the next three decades, India's Supreme Court stepped in and ordered that a register of citizens prepared for the state in 1951 should be updated with the aim of identifying "genuine" citizens. In August, the updated National Register of Citizens, as the list is called, left out nearly two million people, effectively stripping them of citizenship.

In the run-up to its publication, India's ruling Hindu nationalist Bharatiya Janata Party (BJP) had supported the NRC.

The party had also swept to power in Assam's state government in 2016, riding on the support of the Hindus and tribespeople.

But the BJP changed tack before the final citizens' register was published, saying it was error ridden. The reason for that was a lot of Bengali Hindus - a strong voter base for the party - were left off the list, and risked becoming illegal immigrants.

Now the BJP has announced yet another update to the NRC to rectify the "wrongs" of the first list.

The citizenship law - together with the NRC - now threaten to crack open old fault lines.

The Assamese-speaking people - nearly half of the population - feel that they have been betrayed by the BJP, which had promised to detect and deport illegal immigrants. Muslims are angry with the law because they think it is discriminatory and they will be eventually singled out as illegal immigrants only on the basis of their religion. The Bengali-speaking Hindus are upset because reportedly more of them - and not Muslims - have been left out of the NRC.

There are other concerns as well. The law lays out special protections for some areas of Assam which are dominated by tribespeople, to bar illegal immigrants from all communities from settling down there. But many say that because it does not cover the entire state, non-Muslim migrants, living in these "protected" areas could move to other parts of Assam and seek amnesty.

"I don't think the BJP expected this sort of response to the citizenship law and the NRC in Assam. They could turn out to be bigger disasters than demonetisation," says Subir Bhaumik, an expert on India's north-east, referring to the botched currency ban of 2016 to flush out undeclared wealth.

It does appear that the BJP did not anticipate the blowback. In a damage control exercise, Prime Minister Narendra Modi tweeted on Thursday that his government was "constitutionally committed to safeguard the political, linguistic, cultural and land rights of the Assamese people". No-one, he said, "can take away your rights, unique identity and beautiful culture". It is not clear whether Mr Modi's assurances will placate the protesters.