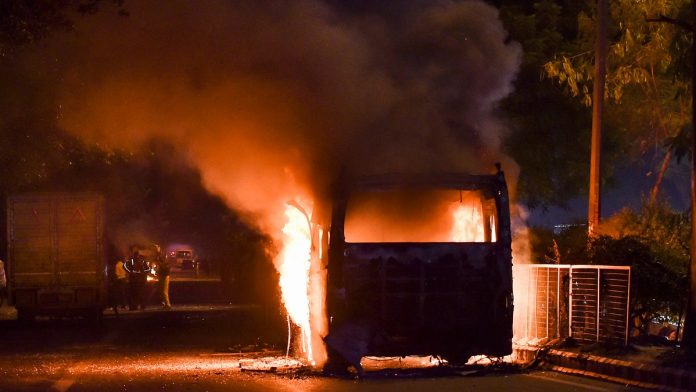 The violent protests against the Citizenship Act intensified in Delhi’s New Friends Colony Sunday as students of Jamia Millia Islamia and locals went head to head with the police. The protests has left one policeman and two fire personnel injured, say authorities.

According to a Hindustan Times report, police took to using tear gas and lathi-charging the protesters after they broke and vandalised cars and set three buses on fire in the South Delhi locality. Students maintain, however, that they did not initiate the violence and were inside college grounds, conducting a peaceful protest.

Saimon Farooqui, the national secretary of Congress-affiliated National Students’ Union of India, claimed the protesters were peacefully sitting on Mathura Road when policemen tried to “trouble” a couple of them, who resisted.

A Jamia Millia Islamia students’ group said they had nothing to do with the arson and violence. They alleged that “local elements” joined the protest and “disrupted” it.

Delhi police underestimated the number of protesters who would be present at the venue, initially expecting only a couple of hundred, says an NDTV report.

Delhi Traffic Police tweeted that vehicle movement was closed from Okhla Underpass to Sarita Vihar due to the demonstration. The demonstrators blocked Mathura Road opposite New Friends Colony, the traffic police said.

Traffic from Badarpur and Ashram Chowk was diverted to alternative routes due to the road blockade.

The varsity had turned into a battlefield on Friday with the students and the police clashing after the protesters wanted to march to the Parliament against the contentious amendment to the Act.