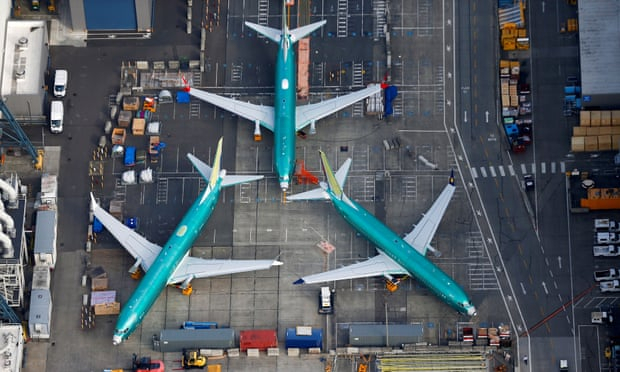 Boeing is considering whether to cut or halt production of its grounded 737 Max after the Federal Aviation Administration said last week it would not approve the plane’s return to service before 2020.

The US planemaker’s board is holding a regular two-day meeting in Chicago, which started on Sunday, and the company could make an announcement on production plans as soon as late Monday.

The Seattle Times reported on Sunday that the board is considering a proposal from top management to temporarily shut down 737 production. A person briefed on the matter told Reuters a temporary shutdown is more likely than another cut, but it would potentially take a few weeks before production could be halted.

Boeing said in a statement on Sunday that the company “will continue to assess production decisions based on the timing and conditions of return to service, which will be based on regulatory approvals and may vary by jurisdiction”.

Boeing has said if it did not receive approval to begin deliveries before the end of the year it could be forced to further slow production or temporarily shut down the Max production line, a move that would have repercussions across its global supply chain.

The best-selling Boeing plane has been grounded since March after two fatal crashes in Indonesia and Ethiopia that killed 346 people.

On Thursday, Boeing abandoned its goal of winning approval this month to unground the 737 Max after its chief executive, Dennis Muilenburg, met FAA administrator Steve Dickson. Dickson said on Wednesday he would not clear the plane to fly before 2020 and disclosed the agency has an ongoing investigation into 737 production issues in Renton, Washington.

Dickson said there are nearly a dozen milestones that must be completed before the Max returns to service. Approval is not likely until at least February and could be delayed until March, US officials told Reuters last week.

Dickson told Muilenburg, according to an email sent to lawmakers by the FAA, that “Boeing’s focus should be on the quality and timeliness of data submittals for FAA review. He made clear that FAA*s certification requirements must be 100% complete before return to service.”

Boeing had said last month it expected the FAA would allow it to resume 737 Max deliveries in December.

American Airlines said Thursday it was extending cancellations of 737 Max flights until 6 April.

The FAA told congressional staff in an email last week Dickson is “concerned that Boeing continues to pursue a return-to-service schedule that is not realistic ... More concerning, the administrator wants to directly address the perception that some of Boeing’s public statements have been designed to force FAA into taking quicker action.”