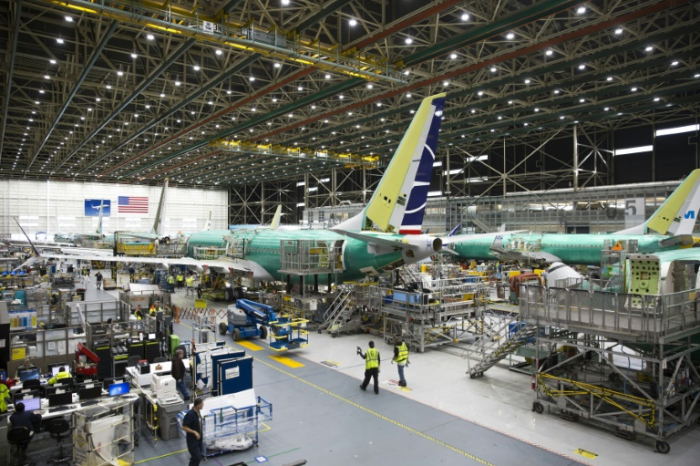 Boeing said Monday it would temporarily suspend production of its globally grounded 737 MAX jets next month as safety regulators delay the aircraft's return to the skies after two crashes, AzVision.az reports citing AFP.

The decision confirmed investor fears that the company's recovery from the crisis is dragging on longer and creating more uncertainty for Boeing than executives anticipated.

Boeing's travails since March have weighed on the US economy, holding down American manufacturing output, trade and sales of durable goods while damaging the company's performance on Wall Street's benchmark Dow Jones Industrial Average.

In a statement, the company said it would continue to pay its workers despite the temporary production stoppage, but the decision immediately raised questions for the future of parts suppliers that contribute to the jets' manufacture.

"We have previously stated that we would continually evaluate our production plans should the MAX grounding continue longer than we expected," the company said in a statement.

"As a result of this ongoing evaluation, we have decided to prioritize the delivery of stored aircraft and temporarily suspend production on the 737 program beginning next month."

The company said it would focus on delivering 400 jets it has kept in storage.

Though the jets have been grounded worldwide since March following deadly crashes in Indonesia and Ethiopia, which left 346 people dead, Boeing had continued to produce 40 of the planes per month at a Renton, Washington facility.

Last week, US aviation regulators issued the company an unusually sharp rebuke, accusing it of pursuing an "unrealistic" timeline for the MAX's return to service and of making public statements intended to put pressure on federal authorities.

The Federal Aviation Administration said Wednesday it could not approve the jets' return to service before 2020, even though Boeing had long said it planned to get officials' green light before the end of this year.

Boeing and the FAA have been under intense scrutiny for their responses to issues with the aircraft, including the flight-handling system involved in both accidents, the Maneuvering Characteristics Augmentation System, or MCAS.

"Boeing seems to have finally come to terms with the new reality that international safety regulators will not be bent to their whim, and the process of returning these planes to service is not as simple as a quick software fix," Senator Richard Blumenthal said in a statement.

Analysts say Boeing's prospects will remain clouded until Boeing can get the all-clear for the MAX to fly again.

"As we have throughout the 737 MAX grounding, we will keep our customers, employees and supply chain top of mind as we continue to assess appropriate actions," the company said, adding that it will disclose financial information tied to the suspension when it releases quarterly results late next month.

Major air carriers that had purchased 737 MAX jets have repeatedly pushed back the dates on which they anticipate a return to service.

Southwest said Thursday it had reached a confidential agreement with Boeing partially compensating the airline for costs related to the grounding of the jets.

Nevertheless, the manufacturer in November unveiled an updated version of the jet, the 737 MAX 10.

Shares in Boeing fall 4.3 percent as investors anticipated Monday's decision. They were down another 0.4 percent in after-hours trading at 2300 GMT.