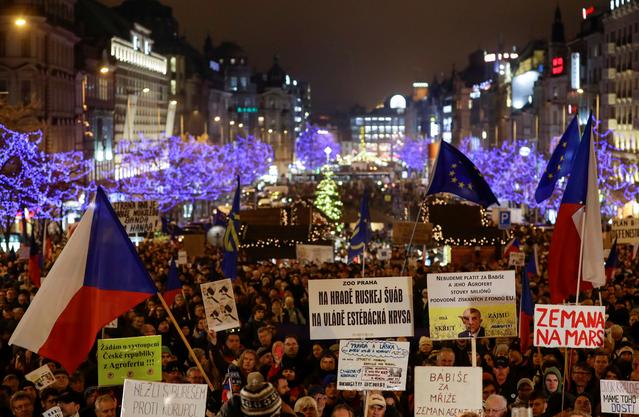 Thousands of Czechs protested against Prime Minister Andrej Babis for a second week in a row on Tuesday after prosecutors reopened a case into alleged subsidy fraud and Brussels declared a conflict of interest between his businesses and political role.

The civic group Million Moments for Democracy has sought to put pressure on the billionaire premier with a series of demonstrations this year, although Babis’s political party ANO maintains a solid lead in polls.

The group has demanded his former business empire Agrofert be cut off from European Union subsidies and public contracts and have called on him to resign.

The hour-long march on Tuesday from Prague’s central Wenceslas Square to the government office drew fewer people than a protest last week that numbered several tens of thousands. Police estimated 15,000 took part in the demonstration on Tuesday, according to CTK news agency.

“We are here because we don’t want to tolerate the continued disintegration of the political culture in our country,” Million Moments leader Mikulas Minar told crowds who chanted “Resignation” before marching.

“We don’t want to tolerate that it becomes the norm to skirt laws, be in a conflict of interest and publicly lie.”

Protests were called after the country’s top prosecutor reopened this month a case against Babis, suspecting that he hid ownership of one of his firms a decade ago so it would qualify for a 2 million euro subsidy.

Separately, an audit by the European Commission, the European Union’s executive, leaked to Czech media this month.

The report showed the Commission saw Babis in a conflict of interest because he still had control over Agrofert, a conglomerate he had built over the past two decades and put into trust funds in 2017 before he became prime minister.

Babis has denied wrongdoing and has said he met legal requirements on conflict of interest with the funds.

Agrofert firms span farming, food processing, chemicals and media, and are among the central European country’s main recipients of various EU money, from farm subsidies that are given per hectare or per animal to project-based finance for innovation and environmental investments.

Babis’s ANO party has held about 30% support in political polls, double his closest competitor, despite the protests. In November a rally timed with the 30th anniversary to the end of communist rule drew a quarter of a million people.