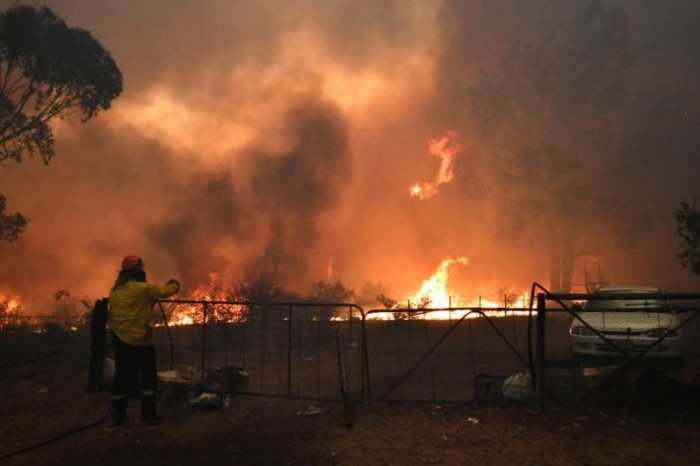 Firefighters battling huge bushfires in Australia used a waterbombing helicopter to try and douse a blaze on the outskirts of Sydney on Thursday, with aerial footage showing the aircraft dwarfed by thick black and grey billowing smoke.

Officials in New South Wales (NSW) state declared the second state-wide emergency in as many months on Thursday as more than 100 fires burned across the state, more than half of them uncontrolled.

Three major blazes were burning around Sydney, blanketing the harbor city in ash and smoke, as temperatures soared above 45 degrees Celsius (113°F) in some areas.

The NSW Rural Fire Service (RFS) posted footage on its official Twitter account of one of those fires, at Green Wattle Creek, around 80 kms (50 miles) southeast of Sydney, as it jumped a railway line.

The short clip showed the waterbomber aircraft flying through the thick cloud to dump water on flames burning in bushland just meters from homes.

The RFS has warned people in high-danger areas to evacuate early as “there are simply not enough fire trucks for every house”.

The state of emergency declared in NSW gives firefighters broad powers to control government resources, force evacuations, close roads and shut down utilities in a state that is home to more than 7 million people.