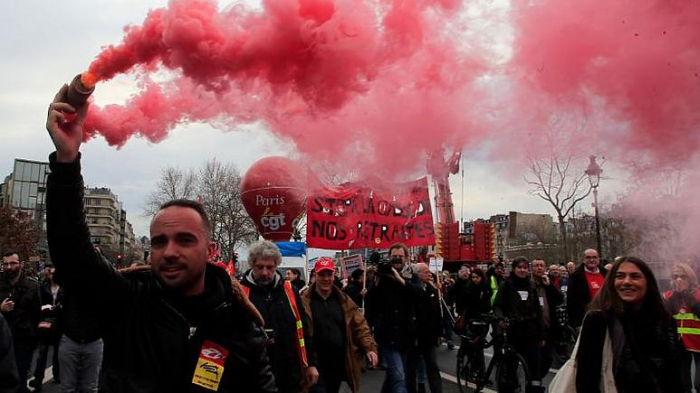 French Prime Minister Édouard Philippe said that the government was committed to overhauling the country's pension system after talks with the heads of trade unions to end 15 days of strikes.

The head of France's powerful CGT union, Philippe Martinez, said following the talks Thursday that there was "nothing new" and a "day of action" would now take place on January 9.

The reforms could see the retirement age raised from 62 to 64 and end a lucrative pension system for French transport workers, who can currently retire at just over 50.

Meanwhile, protesters took to the streets in huge marches in Paris and other cities, at which workers sang anti-Macron songs and were critical of the reforms.

“You cannot do a laborious difficult job in a hospital and treat ageing patients if you are 64 years old," Myriam Pidoux, a psychologist in a public hospital, told AP.

"You’ve never seen a 64-year-old nurse working – at least not in France,"

Meanwhile transport across France continues to suffer heavy disruptions, including to trains and flights, and the unions mute another general strike on January 9 to protest the changes.

The state-owned SNCF rail company has urged passengers to postpone their journeys, saying their services are severely disrupted by the strikes.

On Thursday, just two out of five TGVs (high speed service) were running, while four out of 10 TERs (national and regional services) were planned.

In the capital, six metro lines are totally closed.

Retailers have reported a 25% to 30% drop in turnover in the Paris region in the last week, according to Procos, the specialist trade federation.

The Conseil du Commerce de France (CdCF) has calculated a 20% drop in activity in the Paris region across all sectors combiens, with trades particularly affected: perfumers, toy stores, chocolate makers.

However, "in the large provincial towns, activity is continuing, not in a euphoric way of course, but it is stable," said William Koeberlé, the organisation's president.

Secretary of State Agnès Pannier-Runacher called for a truce for Christmas and urged people to shop at local merchants, saying "this is the time to reach out to them.”

The hotel and restaurant industries have been hit particularly hard, with turnover for hotels down 30%, cafes down 40% and restaurants down 45%, according to a survey of the GNI-Synhorcat union, its spokesman Franck Trouet said.

The situation is particularly "catastrophic in Paris", according to Franck Delvau, co-president for Paris and the Ile-de-France region of the Union des métiers et industries de l'hôtellerie (Umih). "Not only will there be no more events, conferences, seminars between now and the end of the year, but there is a new phenomenon: we no longer have any bookings at all.”

Macron has revealed he is “willing to improve” the key reform of his premiership, and has set the "objective of obtaining a break from the social movement during the holidays," according to the Élysée Palace.

What does the public think?

A poll suggested 66% of the public support the introduction of a universal pension system putting an end to special schemes, which is the basis of the reform proposed by Macron.

However 54% support or have sympathy for the trade unions and youth organisations leading the strikes, according to the Ipsos poll for CNews and Sud Radio.

Furthermore, 61% do not approve of the equilibrium retirement age of 64, the issue at the centre of the battle between the strikers and the government.