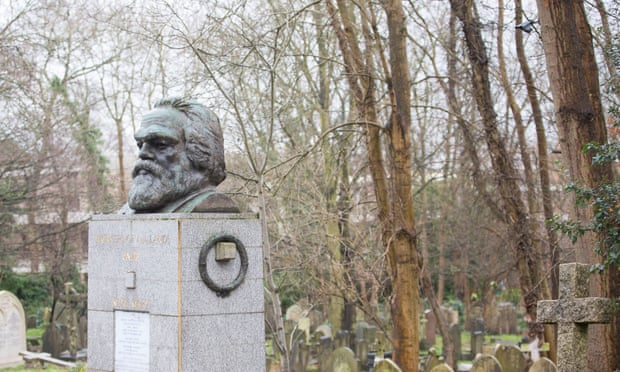 Surveillance cameras have been installed in Highgate cemetery to watch over the tomb of Karl Marx after it was vandalised twice this year, the Guardian reports.

The CCTV devices have been mounted on two tree trunks either side of the Grade I-listed monument. Meanwhile, a marble plaque that was severely damaged in the attacks, in January and February 2019, has been removed for restoration.

The decision to install the cameras was made by the Marx Grave Trust, which owns the monument, after consultation with security experts and Historic England, the public body that oversees the country’s built heritage.

The Friends of Highgate Cemetery Trust, which was also involved in the decision, said Marx’s grave is the first in the cemetery to be surveilled by cameras. The move is designed to deter vandals, including the uncaught suspects who carried out both attacks earlier this year.

Visitors to Marx’s tomb had not noticed the newly installed cameras until they were pointed out by the Guardian.

“It is a bit freaky that they are there,” said Frank, a tourist from just outside Berlin, who was visiting the cemetery with his wife Jana. As a boy, Frank was involved in a project to clean Marx’s tomb during a visit to London from his home in what was then East Germany. “It is sad that it is thought necessary,” he said, nodding towards one of the cameras.

“In Germany this wouldn’t be possible,” Jana said, referring to Germany’s restrictive laws on CCTV cameras. “You see them in some public places, but never in a cemetery.” Neither Frank nor Jana wanted to give their surnames.

Marx himself never advocated surveillance, but he inspired regimes that exercised unprecedented surveillance over their citizens in the name of his communist ideas. George Orwell’s 1984 satirised such regimes with a dystopian vision of a society that was spied on day and night by the all-seeing and all-powerful Big Brother.

Jean Seaton, a professor of media history at Westminster University and director of the Orwell prize, said Orwell would be amused by cameras watching over Marx’s tomb.

“You can imagine the Orwell humbug eyebrow going up. He would find it funny that even a grave is now subject to surveillance,” she said.

Seaton added: “It is wonderfully ironic that Marx, the great outsider, has to be protected in this way as an individual – because that is what the grave represents. All the statues of Marx that have been knocked down were of him as an idol, but the tomb at Highgate represents him as a human. For all Marx’s influence, the uniqueness of individuals is still something that we hold very important. It’s why we find the desecration of gravestone so appalling and such a taboo.”

The plaque damaged by vandals dates back to the original 1883 gravestone for Karl Marx and his wife Jenny von Westphalen. It was incorporated into the current tomb under a bust of Marx when it was constructed in 1954.

In the first attack in January vandals were suspected of using a hammer to damage the text of Marx’s name. In the second attack in February they are thought to have used a bigger hammer to damage the text. In the second attack they also daubed the monument in slogans painted in red including “doctrine of hate” and “architect of genocide”. The police were informed of both attacks but subsequent investigations were limited because there were no witnesses or forensic evidence to identify the suspect.

The damaged plaque has been temporarily replaced with a photographed facsimile while it is being repaired.

John Briggs, from Solihull, who was visiting Highgate cemetery for the first time, was disturbed by the vandalism. “You should be allowed to rest in peace, whatever your political views,” he said.

But he didn’t mind the cameras. “They don’t trouble me, they are just a fact of life now.”

Asked if he shared Marx’s views, he said: “I wasn’t happy with the election result, but I’m not a Marxist.”

Adam, another visitor who didn’t want to give his full name, questioned whether the cameras would prevent more vandalism. “They’re not really much of a deterrent. They could be lights or even bird boxes. If you wanted it to be deterrent you’d need a sign saying it was CCTV but that probably isn’t right in cemetery.”

Ian Dungavell, the chief executive of the Friends of Highgate Cemetery Trust, confirmed that as the owners of the monument, it was the Marx Grave Trust that chose to install the cameras. He said: “They are discreet but not invisible and intended as a deterrent. If people are worried about the security of their graves we are always happy to accommodate them.”

He also revealed there were plans to put up notices to alert visitors to Marx’s tomb that they were being filmed. The Marx Grave Trust has not responded to requests for comment.