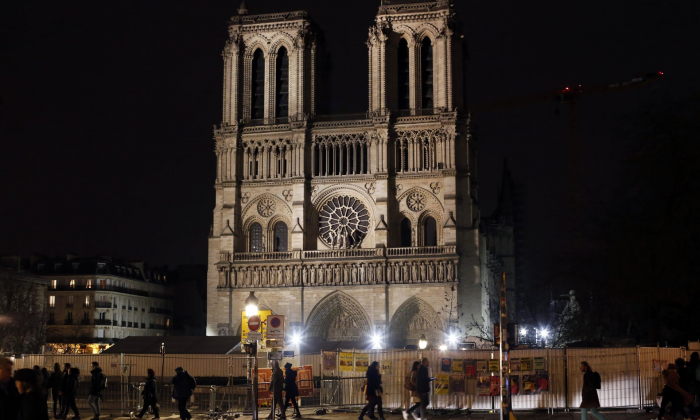 Notre Dame Cathedral was unable to hold Christmas Eve mass for the first time in more than 200 years after a fire ravaged its structure in April.

French Catholics instead gathered at the church of Saint-Germain l’Auxerrois, a few hundred metres away from the Paris landmark, for a service celebrated by the cathedral’s rector Patrick Chauvet.

“It isn’t the same feeling but it’s still a Christmas mass,” said 16-year-old Juliette, who had made the 700km (435 miles) trip from Aix-en-Provence with her family. “There will be a thought for Notre Dame tonight, that’s for sure.”

“We have been crying since 15 April, and today even more,” said Danielle, a Parisian, who attended last year’s mass. She said she felt lifted by the choir of Notre Dame, who performed at the mass.

Meanwhile, the rector of the cathedral said it was still so fragile that there was a 50% chance it might not be entirely saved, because scaffolding installed before this year’s fire is threatening the vaults.

Monsignor Patrick Chauvet said restoration work isn’t likely to begin until 2021 and described his heartache at not being able to celebrate Christmas services inside the cathedral.

“Today it is not out of danger,” he told the Associated Press on the sidelines of Christmas Eve midnight mass. “It will be out of danger when we take out the remaining scaffolding.

“Today we can say that there is maybe a 50% chance that it will be saved. There is also 50% chance of scaffolding falling onto the three vaults, so as you can see the building is still very fragile,” he said.

The 12th-century cathedral was under renovation at the time of the fire, which destroyed its roof and collapsed its spire. One of the toughest parts of the cleanup effort is cutting down the 50,000 tubes of old scaffolding that crisscrossed the back of the edifice.

He estimated it would take another three years after that to make it safe enough for people to re-enter the cathedral, but that the full restoration will take longer.

The building had remained open for Christmas through two centuries – including the Nazi occupation in the second world war – being forced to close only during the anti-Catholic revolutionary period in the late 18th and early 19th centuries.

The French president, Emmanuel Macron, has set a timetable of five years to completely repair the 800-year-old building, which remains shrouded in scaffolding with a vast crane looming over it.

Paris prosecutors suspect criminal negligence and opened an investigation in June, suggesting a stray cigarette butt or an electrical fault could be the culprit.

The culture ministry said in October that nearly €1bn (£856m) had been pledged or raised for the reconstruction.