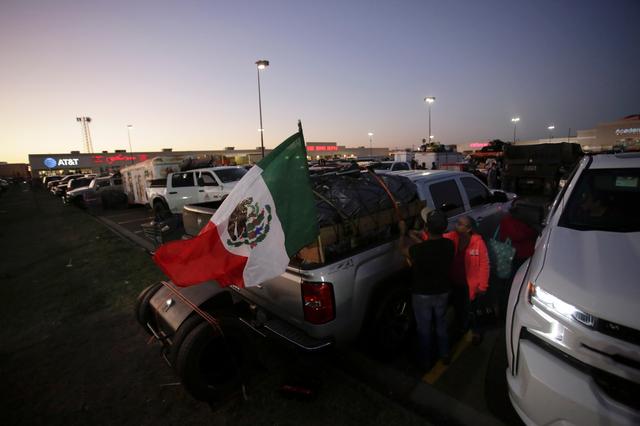 Poor Central American migrants who form caravans to fend off predatory gangs as they cross Mexico’s interior en route to the United States have made global headlines and drawn the ire of President Donald Trump.

But last week in the Texan border city of Laredo a caravan of about 1,500 families made up of Mexican migrants and Americans of Mexican origin set out in the opposite direction - for their Christmas holidays.

Driving large cars laden with clothes, perfumes and other Christmas presents, the Mexicans, all with U.S. legal status, bore scant resemblance to the Central American migrants trudging north on foot, except for their shared fear of criminal gangs.

“There’s a lot of extortion, corruption, many people have been attacked,” said Jesus Mendoza, a 35-year-old painter who obtained U.S. legal residency in August and returned to Mexico for the first time this year since 2001.

About half of the 12 million Mexicans living in the United States have legal residency, and Mexico’s Senate expected more than 3 million to return home this year.

But doing so by car poses a challenge as Mexico’s northern border regions have been racked by a tide of drug-fueled violence that led to a record 29,000 murders last year.

With three young children and a wife he met on Facebook, Mendoza was going back to a Mexico different to the one he left behind as a teenager before the country embarked on a so-called war on drugs in 2006 and violence spiraled.

“It’s a sad thing that some don’t want...to visit their family because of the situation,” he told Reuters in Jalpan de Serra in central Mexico after arriving there on Dec. 16.

Trump has called migrant caravans bound for the United States “invasions” and has threatened to close the U.S. border with Mexico.

Car caravans moving south into Mexico have been rare over the past decade. But those who reached their family homes say safety in numbers is vital.

“It’s sad that when I enter Mexico I don’t feel safe,” said Mariela Ramirez Palacios, a Mexico-born resident of Oklahoma. “The caravan is safe.”