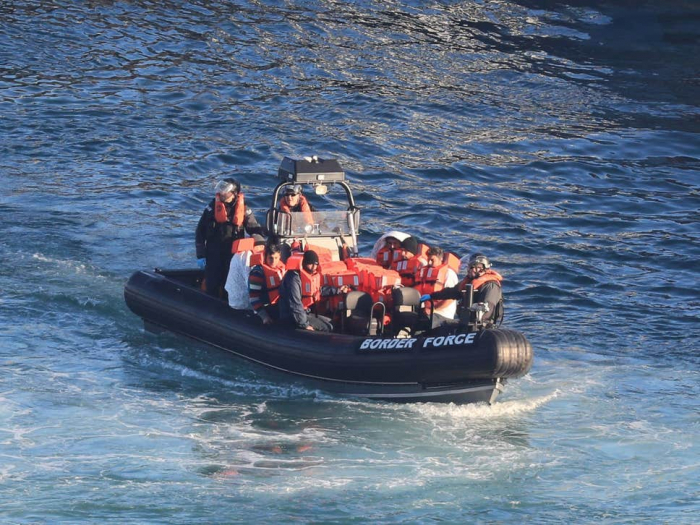 One child was among the 49 men and women rescued from migrant boats in the English Channel on Boxing Day.

The migrants were intercepted while crossing towards the Kent coast in four small vessels at around 1.30am.

Two further boats were stopped by French authorities and turned back, while those who reached UK waters were to be medically assessed and transferred to immigration officials.

According to initial information, the 49 people rescued included one minor. The migrants were said to be Iranian, Iraqi and Afghan nationals.

A Home Office spokesperson said patrols on French beaches had been doubled, with drones and detection equipment deployed to stop migrant crossings.

“Those who seek to come to the UK illegally and the ruthless criminals who facilitate journeys are all breaking the law and endangering lives,” a statement added.

“When people arrive on our shores unlawfully, we will work to return them to mainland Europe.

“In partnership with France, we target the criminals behind this form of people smuggling, to pre-empt crossings and stop boats from leaving French shores.”

The past year has seen a dramatic increase in attempted crossings by dinghies in the English Channel, prompting increased security along the French coast and efforts to return migrants to France.

Smugglers have also used lorry trailers, including one where 39 Vietnamese people were found dead in Essex in October.

The British government has been increasing attempts to stop asylum seekers reaching the UK, despite warnings that its policies are fuelling illegal smuggling and risking more deaths.

More than 120 migrants who entered the UK via small boats have been forced back to the European mainland since January.

In the past year, prosecutions in France have seen 30 people convicted over smuggling with sentences ranging from three months to six years.

Many of those crossing the English Channel are leaving squalid camps in northern France that house migrants who reached Europe on boats from Libya and Turkey.

The UN Refugee Agency estimates that more than 19,000 men, women and children have died while trying to cross the Mediterranean Sea since January 2014.

A report published in November found that the British government was risking the lives of migrants by driving them into the hands of smugglers through punitive policies.

The Foreign Affairs Committee warned that the UK’s focus on closing borders “serves to drive migrants to take more dangerous routes and pushes them into the hands of criminal groups”.

MPs condemned ministers for allowing “dire conditions” suffered by migrants in northern France to continue, while instead ploughing money into increasing security and surveillance.

The report cited research carried out by the government itself that said crackdowns at French ports had caused an increase in small boat crossings over the English Channel, which the UK has been increasing efforts to stop.

“Focusing on increasing border security without improving conditions in the region may have the counterproductive effect of forcing migrants to make desperate journeys across the Channel,” the committee concluded, and urged the government to improve conditions in refugee camps and process asylum claims faster for those with relatives living in Britain.

The report noted that although the UK had received a smaller proportion of asylum seekers who entered Europe during the refugee crisis of 2014-15 than many other nations, it had felt an impact, including a “changed political climate”.