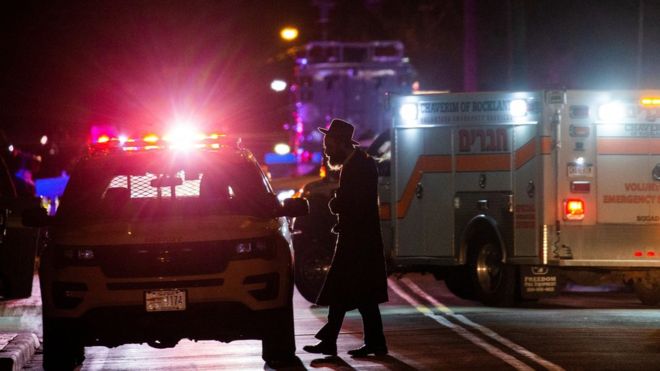 At least five people have been stabbed at the house of a rabbi in New York state, police say, AzVision.az reports citing BBC News.

The house in Monsey, north of New York City, was hosting a religious celebration when the attacker burst in, according to the Orthodox Jewish Public Affairs Council (OJPAC).

The suspect fled but was later taken into custody, police said. The motive was not immediately clear.

One of the victims was stabbed at least six times, OJPAC said in a tweet.

The attack came a day after New York city police said officers were stepping up patrols in heavily Jewish districts following a spate of anti-Semitic threats and attacks.

A man brandishing a machete attacked a Hanukkah celebration at the rabbi's property in Monsey - an area with a large population of ultra-Orthodox Jews, CBS New York reported. The incident happened at about 22:00 on Saturday (03:00 GMT Sunday).

"The house had many dozens of people in there," Yossi Gestetner, a co-founder of OJPAC for the Hudson Valley region, told the New York Times.

Aron Kohn, 65, was in the rabbi's home at the time. He told the paper: "I was praying for my life. He started attacking people right away as soon as he came in the door. We didn't have time to react at all."

Mr Kohn said that the attacker then tried to enter a synagogue next to the house, but people inside had locked the door.

Reports said the attacker fled the scene in a car and some witnesses noted the number plate. Police said later they had located a matching vehicle and arrested a suspect.