Rome's souvenir stands to be moved from main tourist sites 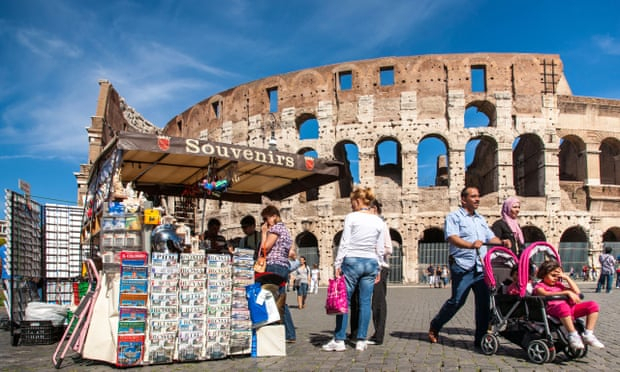 Souvenir stands pitched in front of some of Rome’s most prized monuments are to be moved in an attempt to improve the “decorum and security” of the Italian capital’s most famous tourist sites, the Guardian reports.

The city’s mayor, Virginia Raggi, said the stalls – selling an assortment of trinkets, including T-shirts, mugs, miniature Colosseums and figurines featuring everyone from Pope Francis to Donald Trump – are incongruous with their surroundings.

Seventeen stalls will be moved from sites including the Trevi fountain, Spanish Steps, the Pantheon and Piazza Navona. However, eight of the 17 will still be able to trade on streets away from the monuments, Rome’s authorities said in a notice.

Raggi, who has long pledged to banish the stalls, said the move was intended to protect Rome’s heritage while ensuring safety at its most-visited sites. She said last year that the stalls were sullying the city’s image.

The legislation was due to come into force on 1 January, but two stands were still in front of the Trevi Fountain on Thursday.

Raggi also banned illegal street trading as part of a raft of rules announced last summer, but many still freely operate around the tourist sites.

The mayor has been endeavouring to boost decorum in other ways, such as banning tourists from sitting on the Spanish Steps, eating “messy” food by monuments, wandering around bare-chested and dragging suitcases and buggies down historic staircases. Steep fines are already in place for those who jump into the city’s fountains.

Many of the measures are difficult to enforce, but one that has been successful is a ban on modern-day centurions – men who dress up in tunics and leather breastplates, wielding plastic swords, to make money by posing for photographs.