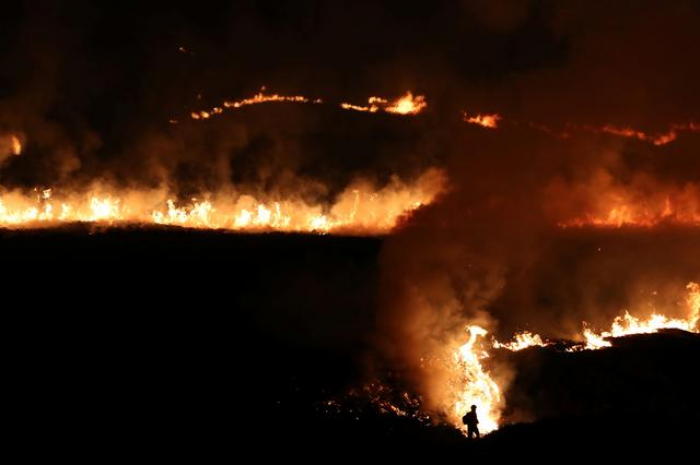 Two more bushfire deaths on Kangaroo Island, in remote South Australia, have brought to 23 the number of people killed in fires across Australia this fire season, with six people still missing in fire-affected regions across New South Wales and Victoria, the Guardian reports.

Fanned by strong, changeable winds, temperatures above 40C and widespread drought conditions, some of the more than 200 fires are burning so powerfully they are forming their own weather systems, even causing lightning strikes sparking new blazes, through pyrocumulonimbus clouds.

The NSW premier, Gladys Berejiklian, warned the state faced a “very volatile situation” and that “we are yet to hit the worst of it”. The state’s transport minister, Andrew Constance, defending his own home against ember attack, told ABC radio “this isn’t a bushfire, it’s an atomic bomb”.

The bodies of the two people, identified as Dick Lang, 78, a bush pilot and safari operator, and his son Clayton, 43, a plastic and reconstructive surgeon, were found after fire burned through more than half of Kangaroo Island. The bodies were found inside a burned-out car on a highway. The fast-moving fire front appeared to have overrun the vehicle while the occupants were fleeing.

“It has been absolutely devastating,” the Kangaroo Island mayor, Michael Pengilly, told the ABC. “The north coast looks like it has been hit by a nuclear bomb. You can’t stop this thing at the moment, it’s bloody impossible.”

Australia’s two most populous states, NSW and Victoria, have had their east coasts devastated by massive out-of-control fires that have destroyed more than 1,500 homes and claimed 23 lives so far. That number is predicted to rise.

Six people remain missing but this figure is down from 28. Across the country, hundreds of thousands of people have been evacuated from their homes.

The NSW Rural Fire Service commissioner, Shane Fitzsimmons, said on Saturday that 148 fires were burning across the state, 12 of which were at emergency warning alert level.

Victoria’s Emergency Management commissioner, Andrew Crisp, said there were 53 fires across the state, with the vast majority of those in the eastern half of the state. Thirteen fires were at “emergency warning” level.

There were also current fire warnings in Tasmania, South Australia and Western Australia.

A sense of anxiety gripped NSW on Saturday, as the gruelling long-running catastrophe of the bushfire season rolled on.

“Right here, we are the meat in the sandwich,” the RFS divisional commander, Mark Coombes, began a shift briefing of new volunteer firefighters at Nowra, on the NSW south coast, “so thanks for coming down”.

The southerly is going to hit ... What it’s going to do I have no fucking idea.

Ringed by fire to the north and south – with flames 40 metres high, running through forest that hadn’t burned in decades – the crews of volunteer and professional firefighters prepared for the fourth, and in forecast most serious, of the extreme days the state had faced already this summer.

“The southerly is going to hit around 9pm, 9.30pm and unfortunately you’re the ones that [have to] deal with it,” Coombes said. “What it’s going to do I have no fucking idea.”

His info was off by about 90 minutes, and the southerly roared through the base with reported gusts up to 101 km/h, whipping up dirt and dust and ash, and filling the briefing room with smoke.

On the outskirts of Adaminaby, a village of about 300 people in the Snowy Mountains in southern NSW, an acrid smoke turned the sky black by mid-afternoon and mud, dirt and ash rained from the sky while a small crew of volunteer firefighters fought two blazes approaching the town from the north and west.

The Adaminaby Complex fire – which split into two sections – was one of five fires burning at an emergency warning level in the Snowy Mountains region and which cut electricity to large parts of the state.

Glen Squire, the captain of the local Rural Fire Service brigade, told the Guardian his small crew of volunteers had been working for weeks to protect the town. But properties further into a dense forest of mountain ash trees were “undefendable”.

“We’ve been trying to get people out there to leave for a while but some of them have stayed, I wouldn’t want to be there,” he said.

Morrison said on Saturday that fire authorities were “well-prepared, well-organised and well-resourced” but governments, fire crews and communities needed to be realistic and understand that some blazes would not be able to be stopped.

“These fire conditions are unprecedented and the challenge is formidable,” he said. “If fierce conditions prevail, today could be a dark day for our country.”

Morrison warned that, with no substantial rain forecast, the fires could burn for weeks, beyond the capability of fire crews to control or extinguish.

“This length of season is, of course, in many senses, unprecedented, but the ferocity and the absence of dousing rains that would normally bring a season like this under greater control is nowhere in sight and so that means a much longer season is planned for.”

The compulsory call-up of army reserve troops to help bushfire-hit towns across the country survive the ongoing bushfire crisis and recover from its impacts is the first in Australia’s history.

Soldiers will provide “civil aid, humanitarian assistance, medical or civil emergency or disaster relief”, the defence minister said in her order to troops.

The governor general formally called up the defence force reservists for an open-ended commitment from Saturday “until revoked”.

The Australian Defence Force will also provide accommodation to families who have lost their homes on defence force bases.

National capital Canberra and the outer western Sydney suburb of Penrith both broke temperature records on Saturday that had stood for 80 years.

The temperature reached 48.9C in Penrith and 44C in Canberra on Saturday afternoon, the hottest temperatures recorded in those areas.