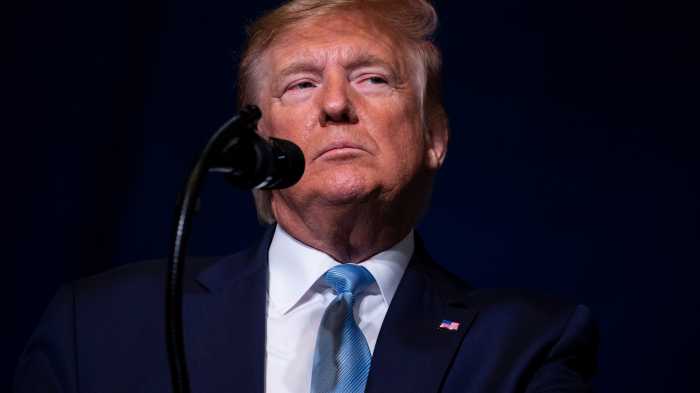 Donald Trump on Saturday drew what may come to be seen as the most significant red line of his presidency in a three-part tweet, vowing specific military action against Iran if it "strikes any Americans, or American assets", CNN reported.

"We have ... targeted 52 Iranian sites (representing the 52 American hostages taken by Iran many years ago), some at a very high level & important to Iran & the Iranian culture" and "if Iran strikes any Americans, or American assets... Iran itself, WILL BE HIT VERY FAST AND VERY HARD," Trump wrote in a series of tweets.

Trump reiterated his warning in a series of tweets early Sunday, saying the United States just spent $2 trillion on military equipment.
"We are the biggest and by far the BEST in the World! If Iran attacks an American Base, or any American, we will be sending some of that brand new beautiful equipment their way...and without hesitation!," he tweeted. "They attacked us, & we hit back. If they attack again, which I would strongly advise them not to do, we will hit them harder than they have ever been hit before!"

The administration has said it wants to de-escalate the crisis but Trump's threat to target Iranian cultural sites is likely to antagonize the Iranian population whether they support the government or not. It's also highly unusual for the US to target cultural rather than military sites, with some critics suggesting such action may violate international law.

"For what it's worth, I find it hard to believe the Pentagon would provide Trump targeting options that include Iranian cultural sites," tweeted Colin Kahl, former deputy assistant to President Barack Obama and national security adviser to Vice President Joe Biden. "Trump may not care about the laws of war, but DoD planners and lawyers do...and targeting cultural sites is war crime."

Trump issued the red line despite the President having repeatedly criticized Obama for presenting and failing to enforce a red line regarding the use of chemical weapons in Syria.

Trump's comments come following the administration warning members of Congress that Iran is expected to retaliate against the US "within weeks" for the strike, even as they failed to convince some that the operation was merited due to an imminent threat against American lives.

There are intense discussions taking place inside US military and intelligence agencies to assess whether Iran might be preparing some type of retaliatory strikes in the next few days or wait for some time, a US official with direct knowledge of the situation told.

The Department of Homeland Security also issued a warning on Saturday of the potential for Iranian attacks, including possible cyber threats.

Acting Homeland Security Secretary Chad Wolf issued a new National Terrorism Advisory System bulletin in the wake of the drone strike that details the attack and potential Iranian threat, including previous plots against US infrastructure and cyber targets.

"Iran maintains a robust cyber program and can execute cyber attacks against the United States," reads the bulletin, which expires January 18.

The President has previously issued vague threats against adversaries like Iran and North Korea, but his string of tweets on Saturday was a marked shift because of its detailed nature and because it followed one of the most significant military actions of his presidency.

Trump also threatened Iran on Tuesday, when protestors attacked the US embassy in Baghdad.

"Iran will be held fully responsible for lives lost, or damage incurred, at any of our facilities," Trump tweeted from Florida. "They will pay a very BIG PRICE! This is not a Warning, it is a Threat."

And later Tuesday, while speaking with reporters as he entered a New Year's Eve gala at Mar-a-Lago, the President said he doesn't want war but that if it comes to conflict, Iran wouldn't last long.

"I don't think that would be a good idea for Iran," Trump said, adding later that a potential conflict "would go very quickly."