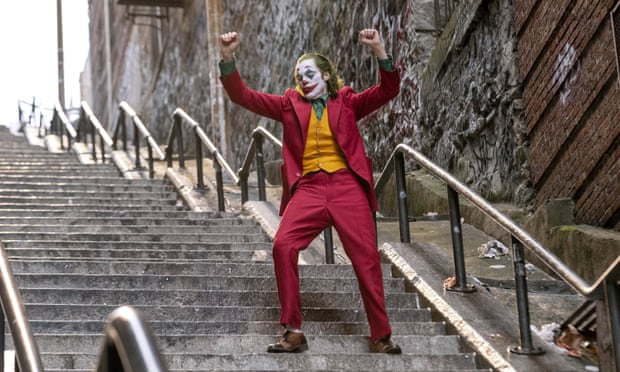 Todd Phillips’ controversial superhero origin story Joker was given a huge nod of approval by Bafta as it led this year’s pack with 11 nominations, including best director, best film and a best actor nod for Joaquin Phoenix, the Guardian reports.

Quentin Tarantino’s Once Upon a Time in Hollywood and Martin Scorsese’s The Irishman were its closest contenders with 10 nominations each, but Phillips’ film, which was heavily criticised on its release for its nihilistic worldview, was the surprise package despite winning only a couple of Golden Globes on Sunday.

Phoenix, who along with Phillips received an eight-minute standing ovation at Joker’s Venice premiere in September, won a Golden Globe for his performance and is now in a strong position ahead of the Oscar nominations, which are announced next week.

However, there was a lack of diversity in the acting categories. Among the 20 major acting nominations there were no actors of colour, with snubs for Cynthia Erivo, Jennifer Lopez, Eddie Murphy and The Farewell’s Awkwafina, who won at the Golden Globes on Sunday. Bafta has been heavily criticised for its lack of diversity in previous years, and in 2018 a report revealed that 94% of all Bafta film award nominees have been white. The only categories with a diverse acting field was the EE rising star award, where Michael Ward, Kelvin Harrison Jr and Awkwafina were nominated.

Joker managed to turn only two of its four nominations into awards at the Golden Globes, where 1917, Sam Mendes’ first world war epic about soldiers trying to survive on the western front, pulled off surprise wins in the coveted best director and best film categories.

Mendes’ film secured nine Bafta nominations, just behind The Irishman and Once Upon a Time in Hollywood, which both received 10, including a best director and best film nomination for both. Joker, Once Upon a Time in Hollywood, The Irishman and 1917 are up against Bong Joon-ho’s Parasite in best film category with all those nominated films also receiving nods in the best director category.

Leonardo DiCaprio, Adam Driver, Phoenix, Taron Egerton and Jonathan Pryce are all up for best actor, while Golden Globe winner Renée Zellweger is up for her role in Judy. She is joined by Scarlett Johansson, Saoirse Ronan, Jessie Buckley and Charlize Theron, who stars in Fox News drama Bombshell.

The biggest snubs were in the best director category where Greta Gerwig again missed out on a nomination for Little Women in another all-male field. Marriage Story director Noah Baumbach didn’t get a nod for either best film or best director, while Robert De Niro missed out in the best actor category. The acclaimed British film The Souvenir, directed by Joanna Hogg, was completely ignored.

But the biggest surprise was the success of Joker, which performed astonishingly strongly with Bafta voters despite a critical reception that said it was “empty”, and the “most disappointing film of the year”. Other commentators connected its fictional vigilantism to real-world violence, and screenings were cancelled after “credible” threats were made. All that didn’t dissuade Bafta voters who made Phillips’ film one of the most celebrated superhero films in the competition’s history, marking a significant breakthrough for the genre.

Netflix had another strong showing with 20 nominations shared between The Irishman, The Two Popes and Marriage Story; however, it struggled to convert a similarly large haul into wins at the Golden Globes. There it managed 34 nominations but only two wins, for Olivia Colman in The Crown and Laura Dern for her supporting role in Marriage Story.

The Bafta shortlists were announced by actors Ella Balinska and Asa Butterfield. This is the first year Bafta has introduced a casting award, with Shayna Markowitz (Joker), Douglas Aibel (Marriage Story), Francine Maisler (Once Upon a Time in Hollywood), Victoria Thomas (The Personal History of David Copperfield) and Nina Gold (The Two Popes) competing for the inaugural award.

This year’s best British film nominees are 1917, For Sama, Rocketman, The Two Popes, Mark Jenkins’ Bait and Ken Loach’s drama about a struggling delivery driver, Sorry We Missed You.

The Bafta film awards will take place on 2 February at the Royal Albert Hall, London.