Venezuela's Guaido sworn in as parliament speaker after stand-off 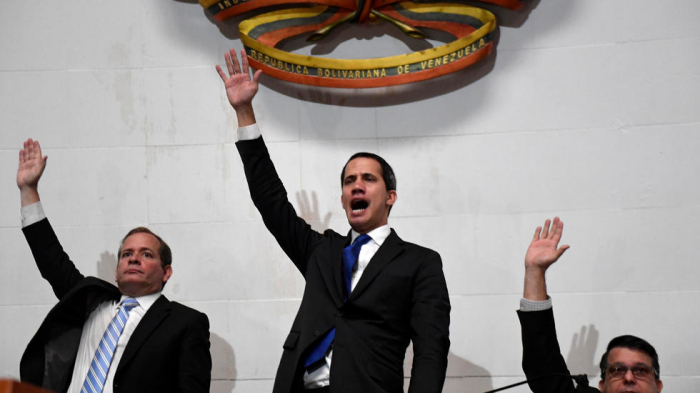 Venezuela's opposition leader Juan Guaido was sworn in for another term as speaker of parliament on Tuesday after a tense stand-off with the armed forces who initially prevented him from entering Congress.

Guaido leads the opposition to President Nicolas Maduro, who is blamed for an acute economic crisis and accused of acting like a harsh leftist dictator, and he is recognized by more than 50 countries as Venezuela's legitimate acting president. The National Assembly is the only Venezuelan branch of government in opposition hands.

While Guaido was barred from entering the building by the National Guard for around half an hour in dramatic and chaotic scenes, his rival claimant to the speaker position, Luis Parra, occupied the chair. By the time Guaido was allowed in, alongside allied deputies, Parra had already left.

"Here we are, showing our face," Guaido said as he took his seat.

Lawmakers sang the national anthem but electricity to the chamber was cut off, leaving deputies to use the flashlights on their mobile phones to provide light. Guaido then raised his right hand and took the oath of office for another term as leader of the assembly.

"These are not barracks!" Guaido shouted at troops, who had set up a check-point at the building's entrance before the opposition leader arrived.

Some of his allies and members of the press were also blocked from getting inside. The opposition said on Twitter that four lawmakers were injured by "regime minions."

The press workers' union wrote on Twitter that two journalists were attacked and robbed of their equipment by armed militias linked to the government.

Inside, Parra, an opposition legislator accused of corruption, was already installed in the seat Guaido has occupied for the last year. Parra caused a storm on Sunday when he declared himself parliament speaker after the armed forces had prevented Guaido from entering the building. Parra was sworn in then by his backers.

Crisis-hit Venezuela has been in political turmoil since last January when Guaido used his position as speaker to declare himself acting president in a direct challenge to the authority of Maduro. He declared on Sunday that he was re-elected to his post after holding a legislative session alongside loyal deputies at the offices of an opposition-leaning newspaper.

The United States warned Tuesday it will punish Venezuela if the political crisis here escalates and Guaido is arrested. The United States has already imposed waves of sanctions against Venezuela in a bid to choke off its badly needed oil revenue and force the ouster of Maduro.

"I think you would see even additional action far beyond what we have pushed out to date," said Carrie Filipetti, deputy assistant secretary for Cuba and Venezuela. In the parliament building, Parra sat in the speaker's seat while burly men appeared to stand guard at the steps leading up to the podium.

Parra was kicked out of his opposition party last month after an online news site accused him of corruption linked to the over-pricing of food imported for the Maduro government. But he remains a deputy and Maduro recognized Parra's election in a television address on Sunday.

The move was denounced by many countries, including the United States and even Maduro's left-wing allies Argentina and Uruguay.

Guaido vowed on Monday to hold Tuesday's parliamentary session and branded Parra "an accomplice to dictatorship."

Parra said Guaido would have the right to attend his session, but as just "another deputy."

Both men claimed on Sunday they had the support of enough deputies to be elected president of the legislature. Before Sunday's vote, Guaido said the Maduro government had bribed some opposition deputies to vote against him.

Parra's support mainly comes from deputies loyal to Maduro while the opposition holds 112 of the 167 seats in the assembly. Guaido said 100 deputies voted for him and Parra claimed the support of 81 lawmakers.

Opposition deputy Henry Ramos Allup, a former parliament speaker, said a verification of the minutes would be undertaken to see "how many voted for them and us."

"To those that bought votes, keep in mind the purchase risks of what you buy," Ramos Allup said.

While Guaido has been recognized as interim president by more than 50 countries, true presidential authority rests with Maduro, who retains the support of the armed forces. As well as two claimants to the presidency and parliament speaker, Venezuela has two parliaments.

The National Assembly has been effectively sidelined since 2017, when the Supreme Court, made up of Maduro loyalists, declared it in contempt. The court has since annulled its every decision.

Maduro then controversially set up a Constituent Assembly -- also made up exclusively of loyalists -- with power to legislate in its place.