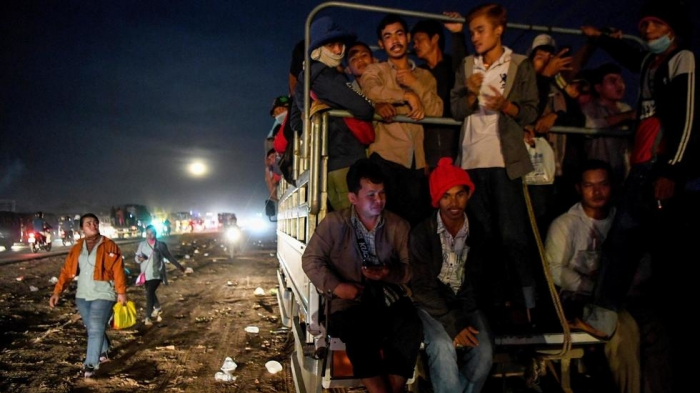 Gripping her friend's shoulder as a truck packed with 30 Cambodian garment workers tears down a pot-holed street, Nguon Sanit says her days are bookended by fear of dying on the kingdom's treacherous roads.

Workers in the sector -- the majority of whom are women -- make dicey daily commutes in a country where road accidents are a leading cause of death.

Cambodia makes clothes and shoes for top western brands in a $7 billion export industry that is also the kingdom's biggest formal employer.

Garment workers have won a monthly minimum wage of $190, which adds up to nearly twice the average annual income, but is still a low salary in a poor country that forces them into unpleasant compromises.

Most pay $10 to $20 a month for standing room on old trucks and vans, which frequently flip over, hurling workers onto roads or crushing them.

According to one study, there are around 12 crashes a day involving garment workers.

"We have no choice... we have to share this crowded truck to save some money," said Nak Khmao, a 35-year-old whose commute from her village is 40 minutes each way.

Drivers start early in the morning before taking a break, during which they may start drinking with colleagues before it is time to pick up the workers, says trade unionist Pav Sina.

"Some drivers are under the influence of alcohol," he said, adding accidents happen "very often".

Garment factories -- which now employ up to 700,000 people -- are strung along highways in several provinces.

Trucks careen down narrow, broken roads and drivers are incentivised by the number of passengers they can jam in for the run to work.

A Cambodian driver who gave his name as Dara said he regularly allows 60 garment workers aboard his ageing truck -- the only way to make a profit after his costs.

"I also put four people in the cabin with me. But I drive slowly. So it's okay," he added.