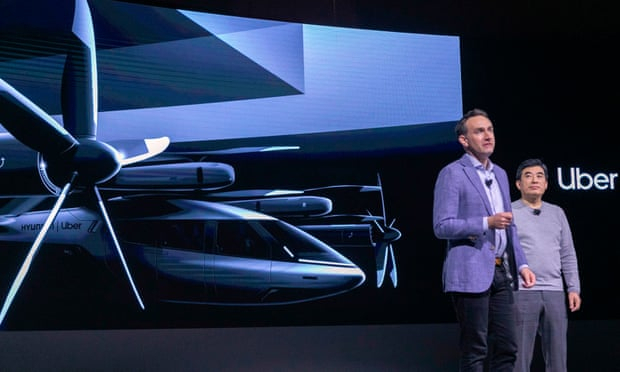 Uber has unveiled plans for a flying taxi at the Consumer Electronics Show in Las Vegas. The ride-sharing company on Tuesday showed off a full-size mock-up of the electric plane concept vehicle created with South Korean carmaker Hyundai, as it seeks to fly above traffic rather than add to it, the Guardian reports.

Uber wants to offer aerial ridesharing, allowing a pilot and three passengers to take city trips of up to 60 miles at a speed of up to 180mph. Resembling a winged helicopter and featuring four propellers, Uber and Hyundai joined forces to design a personal air vehicle, or PAV, which can take off and land vertically.

Uber hopes to operate commercial air ride-sharing services by 2023. The US company has already teamed up with aircraft manufacturers including Bell Helicopter and Embraer to develop its own aircraft, and launched a different prototype aircraft at CES in 2019.

The S-A1 electric plane, to be produced by Hyundai, is the latest attempt to wean air travel off fossil fuels via electric propulsion. But all-electric aviation technology has been slow to get off the ground and has lagged other sectors such as automotive. The world’s first fully electric commercial aircraft, an old seaplane retrofitted with an electric motor, only took its inaugural test flight last month.

Meanwhile, Sony also unveiled an electric car prototype at CES, which was adorned with Sony technology such as sensors and in-car entertainment. However, it is not yet clear if the firm intends to produce its own cars, or develop auto technology to sell to other manufacturers.