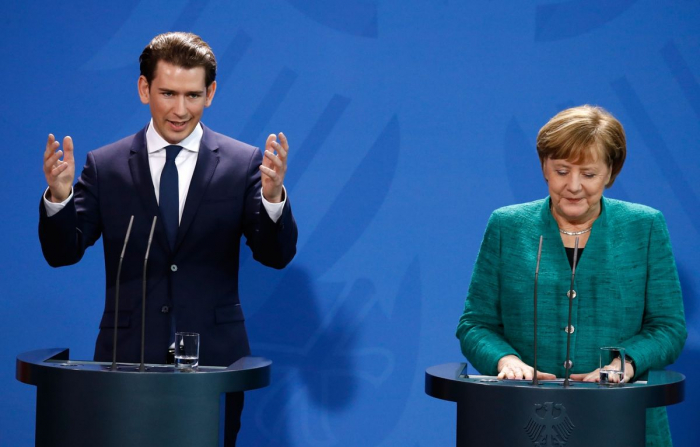 This week, Sebastian Kurz took up the job of Austrian chancellor for the second time in his remarkable career — and started an experiment that could create a template for traditional parties across Europe amid the continent’s political fragmentation. Germany, in particular, should take note.

The parties in the second Kurz government have no common agenda, so they’ve agreed to divide up ministerial portfolios so that they don’t interfere with each other’s attempts to keep election promises. Kurz’s conservative People’s Party, which won the national election last September, will govern with the fourth-place Greens. It was the least bad of several nearly unpalatable options for Kurz, whose previous coalition with the far-right Freedom Party failed miserably. He wanted neither another such alliance nor a traditional deal with the center-left Social Democratic Party — this sort of toothless “grand coalition” has had Germans groaning in disgust for the last two years. Kurz had to go with the Greens, even though, as he told the German daily Bild in his first interview after forming the coalition last week, “the Greens are a party that stands very far apart from us content-wise.”

Indeed, the Greens are pro-immigration while the conservatives want sharp limits on the number of newcomers. The People’s Party is focused on cutting taxes while the Greens demand increases in climate-protection spending. Kurz’s party attaches a high importance to security, the Greens are pacifist. And yet the two managed to work out a 326-page common program and will divide up portfolios in such a way that, at least in theory, each party can still face its voters at the next election.

The Greens got the social security, health and culture portfolios — but more importantly, a new superministry of infrastructure and environment. This new entity will be responsible for setting Austria on a path toward climate neutrality by 2040, 10 years before the European Union as a whole would like to reach that goal. The Greens got to write the climate and environment part of the common program, and it includes giving Austrians the ability to travel anywhere in the country using public transportation for just 3 euros ($3.35) a day.

Greens leader Werner Kogler has agreed to pursue this ambitious agenda without raising taxes; he says it can all be done by shifting the existing tax burden toward less climate-friendly activities, such as the use of diesel-guzzling SUVs. A special commission will work on changing the tax system in that way, and the infrastructure ministry will put a priority on railroads and clean public transportation when it picks projects to fund.

In exchange for letting the Greens pursue their climate agenda, the People’s Party got control of the economy, foreign policy and, importantly, immigration policy. Kurz doesn’t try to hide that he wants to kick out all immigrants whose asylum applications are rejected and that he won't take part in any EU efforts to resettle, for example, the denizens of the overflowing refugee camps on the Greek islands. In the only concession to the Greens’ pro-immigration stance, the cabinet includes a Bosnian immigrant, Alma Zadic, a Greens appointee, as justice minister.

As Kurz explained to Bild, the two parties have agreed “not to negotiate minimalist compromises, but to choose a new way of cooperation — in my opinion a very modern and promising way in terms of democratic politics. We have quite deliberately defined which party should take the lead in which areas.”

The arrangement is designed to avoid the kind of paralysis of eternal negotiation that has struck the German government. It also relieves the parties of political responsibility for actions that their voters find distasteful: It is understood from the start that People’s Party ministers will be tough on immigration and the Green ministers will do everything in their power to get Austrians to switch from cars to public transportation.

The division of labor is relatively easy with the Greens because they’re a party focused on a relatively narrow set of issues. The conservatives, a traditional umbrella party, essentially are letting the experts do their thing on the environment and climate — just as the voters appear to have requested by giving the Greens their best-ever election result and propelling them into a government coalition for the first time.

This should be a tempting model for other European countries where climate issues top the political agenda, including the Nordics and the Netherlands. But it’s especially intriguing for Germany, where the Greens are the second-most popular party after Chancellor Angela Merkel’s conservative Christian Democrats. The rifts between the two political forces are quite similar to those seen in Austria. So if the Austrians manage to divide up the work of government without getting in each other’s way, a similar arrangement could work for their bigger neighbor, too.

More generally, in a fragmented political landscape where people increasingly vote on specific issues rather than along traditional left-right lines, it’s become easier to imagine a government made up of seemingly incompatible parties that implement their separate agendas while only agreeing on basic things like the size of the budget deficit.

That, of course, is an idealized picture. In practice, personality clashes and ideological red lines are likely to undermine such coexistence cabinets. For now, the Austrian coalition leaders, at least, appear to have hit it off. Kurz, who is 33 years old, praises Kogler’s ability to act on his convictions and keep his word. Kogler, 58, admires Kurz’s directness. Spending three months in close contact during the coalition talks appears to have forged a personal link.

But even if Kurz and Kogler fail at their experiment, both deserve kudos for trying something different. There’s so much disruption in European politics that business as usual is no longer an option. Someone needs to scout out workable solutions. Kurz has made a habit of it, and a few other leaders, such as Spanish Prime Minister Pedro Sanchez and, in his own way, French President Emmanuel Macron, also are taking risks to find out what works when traditions are out the window.