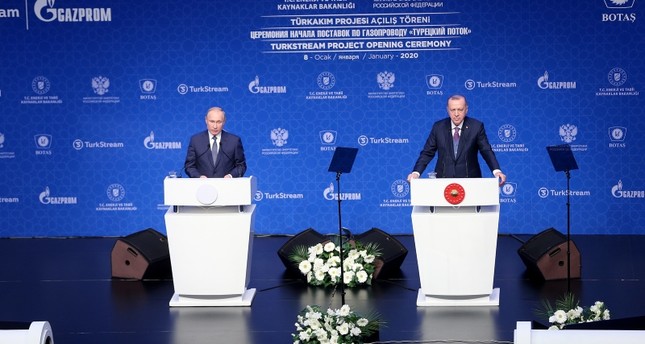 TurkStream is a historic project for Turkish-Russian bilateral relations and the regional energy map, President Recep Tayyip Erdogan said during the ceremony held in Istanbul.

Over the last 33 years, Turkey has received 400 billion cubic meters of natural gas from Russia, which Erdogan described as the “epitome of Turkish-Russian cooperation based on mutual win-win principle.”

The TurkStream pipeline will see deliveries of Russian natural gas to European markets via a subsea pipeline through Turkey. The pipeline begins on the Russian coast near the town of Anapa and runs over 930 kilometers through the Black Sea to emerge ashore on the Turkish coast in the Thrace region, near the town of Kıyıköy.

Erdogan highlighted that European countries are showing a lot of interest in Russian gas that will flow through the second line of TurkStream.The second line of the pipeline would run from Turkey through Bulgaria, then on to Serbia, Hungary and Slovakia. The second section is expected to be completed in 2020.

Also speaking at the inauguration ceremony, Russian President Vladimir Putin said the cooperation between Russia and Turkey is developing in all areas, despite efforts to prevent it. "TurkStream is an extremely important and unique gas transfer system that will help boost cooperation even more," he said.

“The successful realization of TurkStream shows the remarkable outcomes of Turkish-Russian strategic partnership,” Putin said, noting that the Russian gas transport to Europe via Turkey will ensure energy supply security in southeastern European countries and positively impact their economies.

The dual pipeline project has already been loaded with gas and was initially conceived to replace, or at least diminish, gas flow through the Trans-Balkan Pipeline (TBP), which had been transferring Russian gas to Turkey and Europe via Ukraine.

Russia has launched gas deliveries through the TurkStream pipeline set to move onto Bulgaria, Greece and North Macedonia through the new entry point at the Bulgaria-Turkey border.

The inauguration ceremony was also attended by Bulgarian Prime Minister Boyko Borissov and Serbian President Aleksandar Vucic along with officials from Gazprom.