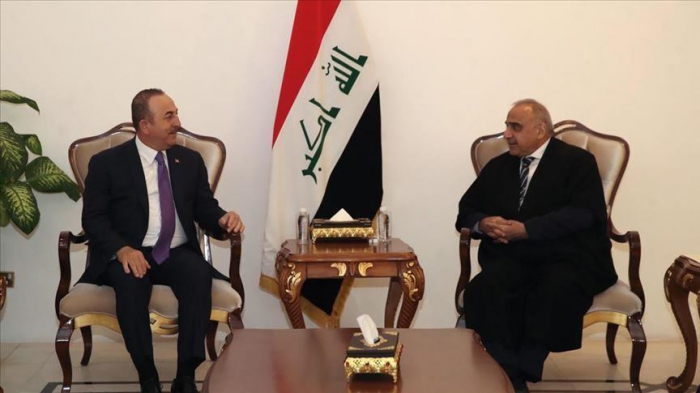 The closed door meeting of Mevlut Cavusoglu and Adil Abdul Mahdi was held at the Republican Palace, with the attendance of delegations from both sides.

Cavusoglu had announced his arrival on Twitter: "In #Baghdad to discuss our relations w/brotherly #Iraq and regional developments."

Cavusoglu’s visit came amid heightened tension between the U.S. and Iran, starting with the killing of an American contractor at a U.S. base in Iraq late last month. However, he is expected to hold talks on bilateral relations as well.

Turkey’s Foreign Ministry said in a Wednesday statement that the visit is “within the context of our intensified diplomatic efforts to alleviate the escalated tension in the aftermath of recent developments in the region.”

The U.S. retaliated with airstrikes on the Iran-backed militia it says is responsible for conducting the attack, killing dozens. The U.S. Embassy in Baghdad was then attacked last Tuesday by a group of enraged militiamen and demonstrators.

U.S. officials have placed blame for the attacks on the U.S. Embassy and base squarely on the head of Islamic Revolutionary Guards Corps' (IRGC) elite Quds Force, Qasem Soleimani's shoulders, claiming if the airstrike that killed him was not carried out hundreds more American lives would have been lost.

Iranian Foreign Minister Javad Zarif said Tehran had "concluded proportionate measures" in response to the U.S. killing of Soleimani, last week, adding that Tehran is not looking for a war with the U.S.